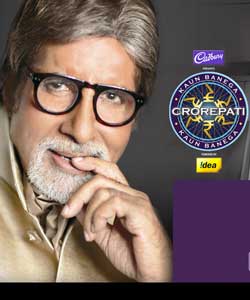 The auditions of Sony TV's very popular show Kaun Banega Crorepati has now reached the happening city of Mumbai. The written tests for the show will be held in the city at H. K. College, Oshiwara, Jogeshwari (W) on July 2nd.

After conducting auditions in Lucknow, Kolkata, Bhopal, Nagpur and many other places, it is time for the Mumbaiites to spring into action and give their best shot to get selected for the show hosted by Amitabh Bachchan.

It is heard that Big B would not be part of the auditions as there will be only written tests conducted.

For the uninitiated, over 50 lakh people registered for the show this season out of which 2315 people were selected for auditions.

Get going Mumbai as KBC auditions have come to town!

shrashri 9 years ago Thank heavens that there is Reality atleast in these show.. never feel bored of watchin KBC whether it was SRK or its AB... lookin fwd 4 d show:)

Wistfulness 9 years ago The third and great show I'll watch. Waiting for this to start.

sonamd 9 years ago by god!!!! getting into kbc is equivalent 2 cracking CAT...IIMs is my Kbc...