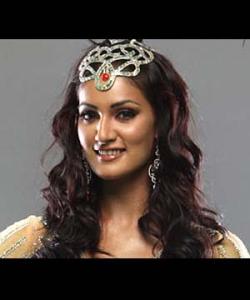 Mukti Mohan, who had made her debut on television with Star Plus' Zara Nachke Dikha, went on to woo audiences with her item number in Sahib Biwi Aur Gangster.

Now we hear that this talented actress is all set to do an item in Dannhiya Productions upcoming Telegu film.

Our source informs us, "The item song is to be shot in Bangkok and is somewhat like a Chikni Chameli of the south.  The song is to be picturized on Mukti along with Ravi Tega who is a superstar down south and has been the reigning king for the past two decades."

When we contacted Mukti, she excitedly revealed, "I have been dancing to the original song for years and hence was always looking forward to doing my own version of the song.  Now that it has become a rage, I am glad that I am getting the opportunity to dance to the popular song down South.  The song is very catchy and you just can't stop yourself from dancing when you listen to it!"

kria_sharon1 8 years ago Mukti ur an amazing dancer..I luv ur very step of ur dance.. :)

smilee17 8 years ago too many spelling mistakes..
its TELUGU not Telegu...
its RAVI TEJA not Ravi Tega...
n he is not the reigning king for the past two decades...!!! lol...
yaaa He Is Hilarious.. :))

-Araina- 8 years ago All 3 Mohan sisters have talent filled in them. Wishing not just Mukti but all three of them all the best!

seared 8 years ago ITS ' TELUGU ' and definitely not 'TELEGU'.

springs 8 years ago These Mohan sisters are so talented - Mukti, Neeti & Shakti!!!

SPN_JD_Addicted 8 years ago Its Ravi Teja! And he is not the reigning king for the past two decades lol