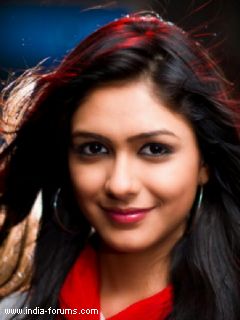 We all have seen the bubbly Bulbul of Balaji Telefilms' popular show Kumkum Bhagya which airs on Zee TV. We have seen her playing pranks on everyone and pulling everybody's leg in the show but do you all know that Mrunal Thakur who portrays Bulbul in the show, is a biggest prankster in real too.

Pretty Mrunal Thakur is known for playing pranks on everybody on her sets. She makes the environment of the sets lively with her naughty pranks which she keeps on playing on everyone on sets.

In a candid chat with Mrunal, we get to know about the pranks she keeps on playing on her co-star Arjit Taneja. She told us, "I always keep playing pranks on Arjit. Once I told him that according to the new track which is coming ahead in the show, you will be meeting with an accident and you will be shown dead. Later, Purab will be coming back to the show but after doing a plastic surgery. That will be played by some other actor so it's your pack up time now. Arjit got shocked to hear this then later I revealed that it was a prank. So, I keep playing such kinds of pranks."

Even we, the team of India-Forums became the victim of her prank. Mrunal was getting ready for her scenes and doing her make up in her make up room while we were sitting there and chatting with her. Suddenly, Mrunal told us that she is angry on us. We wondered why and asked her the reason. Then she told us that it's her birthday today and we didn't even wish her. For a moment, we wondered that it's not her birthday today but she stretched her prank a bit and continued saying that, "I thought you guys have been calling me and came to my sets to make my day special; I was quite excited about it but you didn't."

Seeing her facial expressions and they way she was saying everything to us, we believed on her and wished her. Then she told us about that being a prank. We all had a good laugh then.

It's good to have a person around us who keeps the environment lively with their fun and pranks! We are sure that though Mrunal must be giving a mini 'heart-attack' moment to her co-stars with her pranks on them but eventually they must be having a good laugh knowing that how they have become a victim of her prank.

RaBul_ArNal 6 years ago I love how Mrunal Thakur and Arjit Taneja bond so well. Mrunal is the Queen of Pranks!! SO cutee!!!

Arjitjaan 6 years ago Love you Arjit..you are doing awesome job as Purab.

-Piku- 6 years ago Puran aka Arijit would have skipped a heartbeat listening to that.. Its nice to have people like Mrunal around

DrashtiArjitfan 6 years ago Arjit & Mrunal you both are awesome as Purab & Bulbul..IF please give us a joint interview of Arjit & Mrunal

-Drama_Queen- 6 years ago Loving you too in Kumkum Bhagya &lt;3 &lt;3 Arjit Taneja and Mrunal Thakur rocks :D god bless u both :D