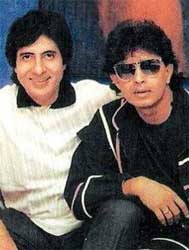 Mr. Amitabh Bachchan and Mr. Mithun Chakraborthy were last seen in 'Agneepath' together. The movie was a super hit, and since then many directors have wanted to cast both amazing actors together.  But none had the luck to shoot with both of them together until Vivek Sharma came along.

After 'Bhoothnath' and 'Kal Kissne Dekha,' Sharma is back with another movie titled 'Buddham Sharanam Ghachammi.'  The project is supposed to be an intense emotional movie, and who better than the 70's super stars to do the job?!

Mr. Bachchan and Mr. Chakraborthy had created magic in 'Agneepath' that influenced many.  Let's see if together they can recreate the magic two decades later!