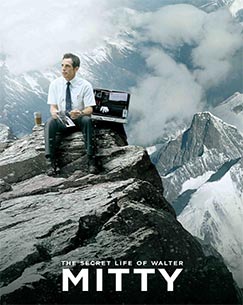 "The Secret Life of Walter Mitty" is an emotional yet enigmatic, light-hearted comic adventure film, based on James Thurber's 1939, classic short story. It is a tale of a nondescript day dreamer who escapes his monotonous life by fantasising events contrary to the situation.

Packed with heroic action and romance, it is a simple story that makes up in charm and character. But unlike the much appreciated classic, Ben Stiller's narration lacks in deeper thematic points and plotting.

The original short story, by James Thurber, was about a married man settled down and domesticated, looking to what could have been, whereas the film's underlined theme is that it is never too late to try.

Set in modern day New York, Walter Mitty (Ben Stiller) leads a dull and lacklustre life working at Life Magazine as its "Negative Asset Manager", curating pictures for its issues. His day is torn between daydreaming and reality and he is often considered a freak.

On the personal front, he pines for Cheryl Melhoff (Kristen Wiig), his colleague from the accounts department and yet, does nothing about it, except day-dream.

Similarly at office he is the most do-nothing person, who is constantly pulled up by his publisher (Adam Scott). After the announcement of the magazines, downsizing and shutting its print edition, Walter is shaken from his stupor when he is tasked to find the negative of a picture by Sean Connell (Sean Penn), a well-known, celebrated photographer that is to be the cover of the final edition.

Walter in his desperate attempt to search for the missing negative, like a detective sorting a jigsaw puzzle, decides to seek the photographer and thus travels from Greenland to Iceland and then to the Himalayas. These expeditions give the film an adventurous tinge.

The first half dwells on the day-dreaming aspect of Walter Mitty, but the transition of the character into an adventurer, is a bit unconvincing. Though, with a back story relating to the loss of his father, it is explained why Walter Mitty is the way he is.

Each frame in the film is simply breathtaking. The lenses zoom out from close-ups to wide angle shots, capturing the locales magnificently. Shots of the sweeping volcanic ash, Walter's plunge into chilling Artic Sea and initial action scene are the ones that speak volumes about cinematographer Stuart Dryburgh's mastery.

What adds to the viewing experience is the remarkable soundtrack. Every song fits perfectly with the mood of the film.

Shirley Maclaine as Edna Mitty, Walter's mother and Sean Penn as the photographer are wasted. Wiig is miscast as Melhoff. But nevertheless, she and Stiller share a nice chemistry, which helps their few scenes together.

With his brilliant comic timing Adam Scott as the corporate head of Life Magazine brings in a few laughs.

Ben Stiller is perfect as Mitty. His charismatic performance is appealing and offers a pleasant break from his usual slapstick roles. He has done a great job as a director, but unfortunately the script by Steve Conrad is not perfect enough to make "The Secret Life of Walter Mitty" an exceptionally good film.

There are several instances that seem insincere with loose ends or flaws in the narrative, which throw the viewer off gear.

But nevertheless, with all its flaws of preachy life lessons or product placements, the film is beautiful in itself and worth a watch.