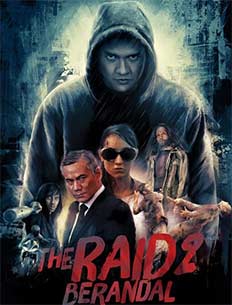 Set in the underworld, crime-infested Jakarta, Rama (Iko Uwais) the rookie cop in "The Raid" is sent undercover as Yuda to a prison so that he can befriend Uco (Arifin Putra) the son of a crime lord and then rat out the whole setup; to root-out the real threat of political corruption in Jakarta.

Rama does this to avenge his brother's death and to protect his family from being eliminated.

The plot plays on the basic theme of the monkey and the two cats fighting for the cheese they find. Inter-gang rivalry based on ethnic background between the local crime boss Bangun (Tio Pakusodewo) and the Japanese boss Goto (Ken'ichi Endo) is flared by the Arab boss Bejo (Alex Abbad) who instigates Uco to ignite the flames of conflict.

Rama fights on because he can and because he must. In the process, he is subjected to so many double-crosses that it's a wonder he knows who he's fighting any more.

The cast includes both veteran and fresh faces from the Indonesian film industry who deliver convincingly.

Writer-director-editor Gareth Evans may be considered as a trendsetter who offers set action pieces with artistic flare. The way his shots and sequences are designed and executed onscreen is remarkable. The in-prison battle in wet mud slush, the street fights, the terror caused by the hammer wielding dumb and deaf girl in the metro along with a boy brandishing a metal baseball bat in an industrial estate and the sword and gun fights in the speeding automobile - each piece excels the previous set.

Loaded with shades of grey, visually, the camera frames are taut and astonishing. What's more? It captures action is claustrophobic space, with top angle shots especially when over fifteen goons pile up in a toilet cubicle in the prison or when Rama is fighting in the car.

What adds to the effect of the gruesome blood curdling carnage is the effective background score and prosthetic make-up that makes you squirm in your seat.

But what makes this entire viewing experience a farce is the director's careless eye for detailing. His action structure persists in lining up his goons and sending them in single file to be thrashed by the protagonist makes for amateur action choreography. Also in another sequence during the mayhem in Bangun's office when Bejo and his men barge in, Bangun's secretary is noticed seated calmly at her table, totally oblivious and unaffected by the action around.

Also the mismatched lip sync in the English dubbing can be a distraction initially.

Overall, this film is for those who are into mindless bloody gore and crazy action.

Taapsee Pannu breaks silence on IT Raid, gives epic reply: “Not so ...

Taapsee Pannu’s boyfriend Mathias Boe reacts to IT Raid at her house, ...