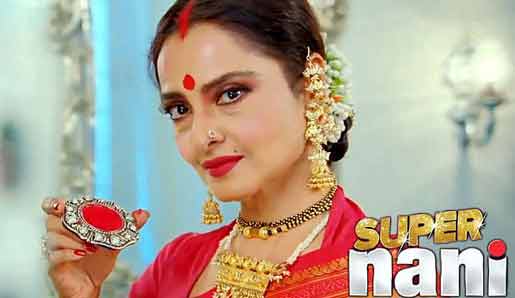 Mothers hold a special place in most of our lives. So we can only understand what a grand place a grandmother holds in our lives. Inder Kumar's Super Nani is nothing but an out and out family drama on the similar lines. The ever green beauty Rekha plays the central character of the movie. The film has an audience that is restricted but has a definite audience. We do love our mothers, but this movie becomes a little over dramatic at most sections.

A sixty-something selfless grandma is worth as much as a kitchen mop to her selfish family. But her foreign-returned grandson transforms her into a woman of substance.

Rekha!! The ever green beauty doesn't cease to enchant the audience with her charm, beauty and talent. She looks gorgeous on screen and delivers a phenomenal performance. She plays the central character of the film, Bharti Bhatia, who is a very homely person, whose life revolves around her family and God. The revolutionary change that her grandson brings in her forms the twist in the tale. Rekha pulls off the character of a simple housewife as well as a shining diva with the same poise.


Next to mention is the Super Nani's super grandson.  Sharman Joshi plays Mann in the movie and is Rekha's grandson. He brings about the change in her life and that is all he has to do in the film.  He tries to pull off a funny accent but falls flat in most of the places. There is a forced in romantic track in the film which is of no need at all n just adds to the screen time.

Randhir Kapoor plays the role of RK Bhatia, who is Rekha's husband in the film. He plays the negligent husband who disrespects his wife all the time.  For most of the scenes he seems to be just overacting n the rest he doesn't have much to do. Anupam Kher has a small role in the film but nothing much to mention.

The songs have an old touch to it and no hummable tracks. All in the entire movie is only a family drama, which tends to get melodramatic to another level all together has an audience who has lived and grown on those. Go for this one with the elderlies of the family as there are very few movies we watch with them.

Heartbreaking moments before Rajiv Kapoor’s demise: “My nurse went to ...