View Profile
One-upmanship has been a hot favorite for many comedies in Bollywood. From Deewana Mastana to the recently released Hum Tum Shabana, Bollywood loves to show their leading men fight for the heroine. The same trend repeats with Rascals. Sanjay Dutt, Ajay Devgn and David Dhawan – three renowned entertainment personalities synonymous with the comedy genre come together for the eagerly awaited comedy flick – Rascals. 'Rascals' is basically a
comedy about two cool competing conmen trying to out-scheme each other in 'apparently' amusing and surprising setups. 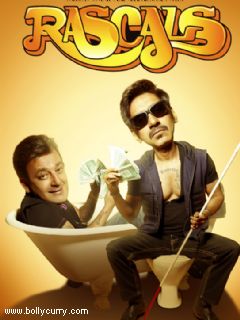 Warning: These Rascals are actually dangerous! And sadly, not in the way they intend to be! The movie starts off with an animated credits roll, which is far more entertaining and appealing than the entire film itself. What's the problem? Well, it's simple – the comedy just falls absolutely flat! In spite of the Sanjay Dutt and Ajay Devgn's dynamic duo, the movie
completely fails in making you laugh! All that the film makes you feel is restlessness, irritation and frustration. The comedy is horribly forced. It seems like scenes are especially designed in a manner to force your laughter. However, except a scene or two here and there, it yet fails miserably! I do understand the minimal importance of 'sense' in such slapstick comedy movies, however, there's even a limit to bearable nonsense. The film is outright dumb, stupid and cheap! The humor is horribly loud and over-the-top. Unlike the entertaining All The Best, the chemistry between good friends Sanjay Dutt and Ajay Devgn fail miserably this time. In fact, so uninteresting and unfunny is the camaraderie that you don't really care who gets the girl in the end. Coming to the 'cheap' bit, it seems like the film tries to overcome all its shortcomings by providing cheap skin exposure of the heroines – Kangna Ranaut and Lisa Haydon. It's usually argued that heroines are merely used as backdrops in Bollywood films, and Rascals is the perfect example for this statement. In fact, I would go to the extent of saying that Rascals is another shame in reference to the respect of women in Bollywood films. Kangna Ranaut is seen stripping off her top throughout the film for the most idiotic reasons possible. Also, 'apparently' blind Ajay Devgn throws himself on Kangna touching her nearly endless amount of times, which is okay with Kangna considering he is 'blind'. I wonder since when did blind people get the license to nearly sexually molest women! 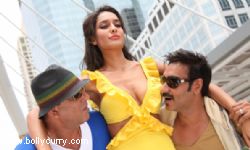 This is not the quality of cinema you expect from the veteran David Dhawan. Screenplay by Yunus Sajawal in boring and uninteresting! Dialogues by Sanjay Chhel seem dated. Cinematography by Vikas Sivaraman is impressive. Ajay Devgn gives in his best, but is letdown by a non-existent script and torturous screenplay. Sanjay Dutt looks old! It's not entertaining to watch him on the silver screen in this avatar anymore. It seems like Kangna Ranaut signed on this movie only to show off her assets, because that's all she does in the movie. Besides that too, she's screechy and irritating! Lisa Haydon looks ravishing. However, she just can't act!
Arjun Rampal looks cool and dashing. One wonders the reason he chose to be a part of this disaster. Chunky Pandey and Satish Kaushik contribute a few funny scenes. A special mention for Arjun Rampal's mother – she provides a few laughs at the start.

Overall, stay away from these Rascals! Even if you love the 'masala' entertaining flicks (there are many other options available – Golmaal, Housefull, Munnabhai MBBS, etc); even if you're a mad Ajay Devgn or Sanjay Dutt fan (watch All The Best again instead); even if you can't wait to watch Kangna Ranaut and Lisa Haydon in a bikini (surf the internet instead); and even if you're in desperate need of some light fun entertainment (watch Deewana Mastana again instead)!! Basically, just stay away!! Absolutely nothing… Nothing is worth these painful 2 hours!!!