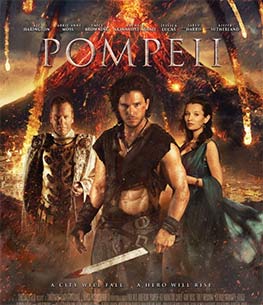 A historical drama based on the ill-fated Roman city of the same name, director Paul W.S. Anderson's "Pompeii" is a far cry from Robert Harris' 2003 novel. Yet, the film is distinct and appealing. It's a revenge drama with a tinge of romance and dollops of natural disaster.

The film begins eerily with the camera drooling over fossilized bodies. The stoned images, gruesome and weather-beaten, are accompanied by a quote - "In the darkness some prayed for help, others for death," attributed to Pliny the Younger". It claims it is accurate as far as the history and politics of Pompeii at that time.

Set in 79 AD,, the film dismisses the plot of the novel and invents its own set of main characters. It follows Milo (Kit Harington), a "Celta slave. He is the last surviving member of his tribe, The Horsemen."

As a young child, Milo survived the massacre by being dumped beneath the corpses while he watched his mother and his entire tribe being slaughtered by the corrupt Roman General Corvus (Kiefer Sutherland) and his Aide Proculus (Sasha Roiz).

Seventeen years later, the boy, trained to be a deadly gladiator, is the star performer at the arena in Londinium, the capital of Britanny. Soon his greedy master packs him off to the city of Pompeii to serve as violent entertainment for its blood-hungry citizens.

En route to Pompeii, by pure happenstance Milo meets and creates an impression on Cassia (Emily Browning), the non-conformist daughter of the town chief Severus (Jared Harris) and his wife Aurelia (Carrie-Anne Moss), who's heading back home after spending a rather turbulent year in Rome.

Meanwhile, Corvus too lands in Pompeii as the Senator of the Emperor Titus and is the deciding factor for investments from Rome. He craftily gets Severus to hand over his daughter in marriage to him.

Milo arrives in Pompeii on the eve of the Vinalia festival and is flaunted to the citizens. The next day, he is expected to fight the local champion - a massive black slave named Atticus (Adewale Akinnuoye-Agbaje) who is nearly one last death-match away from earning his freedom.

With deadly sword fights in the gladiator's arena, the love triangle, inclusive of horse chases and the rumbling Vesuvius followed by a killer tsunami, gives thrust to the narration that keeps you spell-bound and glued to your seat.

As far as the performances are concerned, there is nothing extraordinary. The characters are immediately recognizable as sympathetic or not, and on the whole, there is not very much complexity in character development.

Though the romance could be generic and the gladiator fights seem to be borrowed lavishly from films like "Gladiator" and "The Legend of Hercules", there is some freshness in the action set pieces. The sword fights as well as the chases are well devised and choreographed.

The script by Janet Scott Batchler, Lee Batchler and Michael Robert Johnson, is crisp and focused. The tension is carefully and precisely mounted to construct the doomsday effect. Though the event is predictable, the look and feel of Glen MacPherson's visuals in 3D is enchanting. They beautifully merge with computer generated special effects of the volcanic eruption, the tsunami and the submerging of the land.

The film is worth a watch for being a grand visual spectacle.