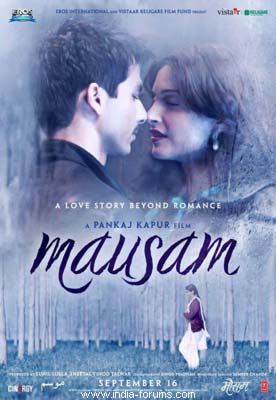 Expectations! There are loads of expectations from Mausam. Reasons? Well, it marks the directorial debut of veteran actor Pankaj Kapoor. Shahid Kapoor comes back nearly after 2 years (omitting Milenge Milenge) onto the silver screen. Shahid Kapoor and Sonam Kapoor are paired opposite each other for the first time ever. The film has taken two years into its making being constantly involved in various controversies from the very beginning. And lastly, father Pankaj Kapoor and son Shahid Kapoor, two perfectionists in their own right, are working together for the first time ever. So does the film live up to all the hype and expectations? NO!

Mausam's story takes the help of four different seasons. Starting off its first season with a mere adolescent attraction between a Punjabi boy Harry, and a Kashmiri girl Aayat, in a small village of Punjab, it develops into young love between them in the second season. Their love realizes its own depth in the hours of separation through season three. And in the fourth and final season their love culminates into togetherness. But not before sacrificing a lot personally and learning the truth behind universal love...

Well, undoubtedly, Mausam is a visual treat. It's one of the best looking films Bollywood has produced in the recent years. The film starts off with the traditional style of romance between Shahid and Sonam's characters in a small village of Punjab which is easily the best part about the film. The innocence, simplicity, situational humor, and Shahid – Sonam's chemistry makes it nothing less than a treat to watch. In fact, the first 40 minutes further raises your expectations from the rest of the film. But sadly thereon, the film only dips, dips, and dips! The biggest problem of this film is – its pace! Yes, the film looks extremely artistic. However, when a film starts making you feel exhausted rather than entertained, you do realize the difference. The first half of the film is still bearable due to its entertaining initial 40 minutes, and the beautiful Scotland locales in the latter. However, it's the second half where the film ruins it all. There are just too many separations and issues occurring in their lives, which not only makes the film extremely repetitive but also very tedious on the audience. In fact, the scene in which they finally meet in the end should have been a breathtaking moment. But you really don't care about them anymore by then! The love story goes through various hindrances touching the Kashmir, Mumbai, Ahmadabad riots and even the 9/11 twin tower blasts. Frankly, what is the need of involving so many incidents in one love story? Are they really so damn unlucky? The amount of twists and turns in this film makes you feel that you're watching an Indian television soap. Also, without revealing too much, the climax just seems outright stupid and ridiculous! Adding up to the stupidity, is Shahid Kapoor's 'superhero' act in the end. What on earth was all that about?? 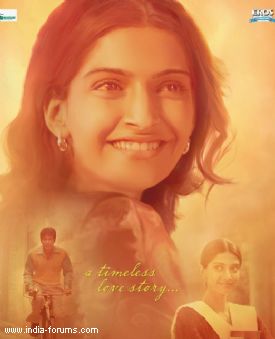 A lot more was expected from the veteran actor Pankaj Kapoor's directorial debut. Sadly, he doesn't live up to them at all! The screenplay written by him is in simple words, boring! The main hero of Mausam, except Shahid Kapoor, is its cinematographer Binod Pradhan, absolutely brilliant work! The music by Pritam Chakraborty is a delight to hear.  The background score is also worth mentioning, which matches up to every scene appropriately. Moving on to the actors, this is undoubtedly Shahid Kapoor's best performance till date. After Aamir Khan and Hrithik Roshan, Shahid Kapoor has proved to be the next star perfectionist giving in flawless performances with every film. From the dialect of a typical Punjabi village boy to the disciplined mannerisms of an Air force officer, he has got it all right! If the movie is even a tad bit watchable, it's thanks to Shahid Kapur. Besides the fact that Sonam Kapoor is the lead heroine of the film, she doesn't have much to do in comparison to Shahid. In fact it's hard to even remember any of her dialogues. Yes, she has improved compared to her previous films. But sadly, it still doesn't seem enough. In fact, she seems quite fake and expressionless at times. However, she does look breathtakingly beautiful. Supriya Pathak needs no praises! She's simply terrific. And a surprise package is in the form of Aditi Sharma who plays Rajjo, the girl madly in love with Shahid Kapoor. Nice work!

Overall, this is one of those mausam's which might look beautiful from the outside, but once you get into that space, you realize what a big nuisance it actually is! In m opinion, it's the biggest disappointment of 2011!