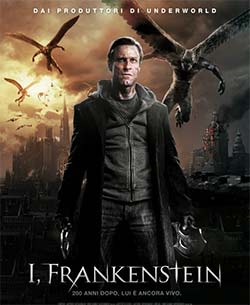 The film begins eerily. In 1795, a hooded guy with a horrifically scarred face drops a corpse from a bridge into a raging river, saying "A life for a life that is what I wanted. So I killed his wife". What follows is the hooded guy being chased by Frankenstein, in the Arctic, but the cold kills him and the hooded guy gives him a fair burial next to his wife. These first few scenes capture the momentum and spookiness of the plot.

Moments later, the hooded guy is chased by demons in a bid to kill him. Then all of a sudden he is whisked away by a pair of gargoyles to a strongly guarded cathedral where he is presented before the compassionate gargoyle queen Leonore. During the conversation it is indicated that 200 years have passed after the first incident. She reveals to the hooded guy, "You are drawn into a war raging between the demons and gargoyles after been shunned by your human creator, Victor Frankenstein." With this thereby implicating that the hooded guy is a monster.

She names the unnamed monster, "Adam" and educates him that the demons could be destroyed by sacramental offerings like, "Bible and holy water". She further divulges, "You are being hunted by Naberius, the Prince of the demons because you are packed with strength, speed and power- more than any humans."

Apparently, Prince Naberius, under the guise of Wessex, is keen to study Adam's constitution so that he can create an army of soulless bodies which the demons could then possess. On the other hand the gargoyles hope to keep Adam and Frankenstein's dairy out of the demons reach.

With Adam not interested in joining either side, what follows is a battle of survival with the demons, disintegrating into tons of bright red embers and the gargoyles diminishing into heavenly blue beams.

With an unwieldy plot and shallow character graph the script is packed with heavy expository and humorless dialogues. This makes the viewing experience a bit tedious.

Aaron Eckhart with his taut six packs fits into Adam's skin with natural grace. His extensively sutured mask helps him portray a scowling image more attuned to Scarface than a monster.

Miranda Otto as Queen Leonore and Bill Nighy as the emotionless and treacherous Prince Naberius are unexploited. As team leaders in the ungainly plot, they seem to be ineffective and uninspiring in their part. Hence, they do not leave an impact. In fact, it's the lower rung gargoyles and demons in the human avatar with well chiseled bodies that add the glamour quotient on screen.

Director Beattie ensures that the film is busting with sleek jam-packed action sequences. With seamlessly integrated computer generated images, the visuals are lively in well-defined atmospheric setting and brilliant lighting. The sets, the costumes and other production design elements are attractive and nice to look but only when the camera holds still for long enough.

Unfortunately, the quick edits mars the flourish of the aesthetics. The issue is; every action sequence after a while seems staged like a long drawn video game. The fights are filmed in a monotonous manner, thereby tending to be ineffective and boring. And, honestly, over a period of time the entire experience sedates you, forcing your mind to switch off.