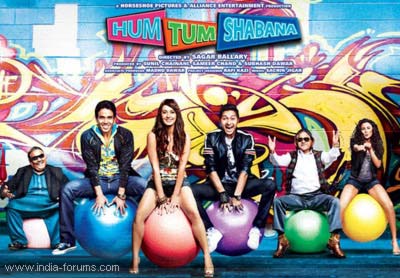 It's said that comedy is no easy business. However, currently, comedies seem to have become a hot favorite among Bollywood film-makers. From David Dhawan to Rohit Shetty, directors and producers are especially in love with the slapstick comedy theme. It not only brings in the moolah and is easier to connect with the audience in the form of light entertainment, but also leaves no scope or expectations of 'sense' in these leave-your-brains-at-home films. Following this trend is Sagar Ballary who is ready after the disaster Bheja Fry 2, with his next release Hum Tum Shabana releasing today. Result? Yet another disaster!

Two guys, one girl, seems like a simple enough love triangle right? Wrong! There is nothing simple about this madcap story, especially when their rivalry to woo a girl lands them into a crazy contest of epic proportions. The story spins around Rishi (Tusshar Kapoor) and Karthik (Shreyas Talpade), who get themselves into a crazy competition to win the girl Shabana (Minissha Lamba). And out of desperation, soon enough, this battle to woo the girl turns into a desperate battle to lose the girl.

After Tere Mere Phere, Hum Tum Shabana is yet another disaster releasing this week. What's the problem? Well, it's simple – the comedy just falls absolutely flat! In spite of having comedy regulars like Shreyas Talpade, Sanjay Mishra and Satish Kaushik, the movie completely fails in making you even smile, forget laughter! All that the film makes you feel is restlessness, irritation and frustration. The comedy is horribly forced. It seems like scenes are especially designed in a manner to force you to laugh. However, it yet fails miserably! And I do understand the minimal importance of 'sense' in such movies, however, there's even a limit to nonsense. For example, Minissha Lamba on being questioned regarding her reason behind participating in the modeling competition says "Meine iss modeling competition mein hissa liya hai, dost banane ke liye!" Okay, what one should really expect from a film that has the lead protagonist say this ridiculous dialogue?! Another example, Minissha Lamba storms out of the hotel showing her displeasure towards both the leading actors' attempts to get her; and in the next scene she says, "I really don't know who to choose from the two of you!" And also, she knows them since a maximum one week, and you have Minissha say, "You'll are the best friends I have ever had!" I can go on and on with many more such instances! But seriously, at least some sense should be maintained in a film, be it even a slapstick comedy! Also, what's that? Tusshar Kapoor loses his voice in the film and starts his 'Golmaal' tactics, with Shreyas saying "Main abhi iski yeh bhasha thodi thodi samajhne laga hoon". What was the need of cashing upon Golmaal?! And guess what, even that doesn't make you laugh! 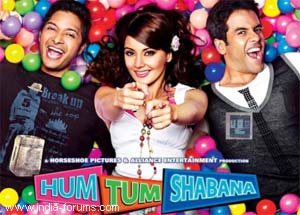 What's wrong with Sagar Ballary? After making the humorous Bheja Fry, it seems like his humor quotient has vanished away in thin air. First Bheja Fry 2 and now Hum Tum Shabana, Sagar Ballary is just going from good to bad to worse! Screenplay and story by Farhajaan Sheikh is in simple words – uninteresting, senseless and frustrating! Cinematography by Anirudh Garbyal is nothing extra-ordinary. A special mention for lyricists; what on earth were you thinking while writing the song – "Thank you Mr. DJ!" Coming to performances, Shreyas Talpade seems to be at ease. However, the script lets him down. Tusshar Kapoor seems a complete misfit for an apparent 'manipulative' character. Though, he does give in his best shot. Minissha Lamba is another complete misfit for her character. How on earth does one assume Minissha Lamba to be a model?! She seems ridiculously short and way chubbier in front of all the other contestants. And sorry but, how should one believe Minissha Lamba defeating the hot and gorgeous Pia Trivedi in any modeling round?! Nevertheless, Minissha Lamba has hardly any role in the film. (Does this have anything to do with the reports claiming Sagar Ballary to cut short Minissha's role in the film post their spat in the past?) About her acting, she's just about okay in her bit. However, it's Satish Kaushik and Sanjay Mishra who contribute to the few less tedious scenes in the film. Being the experts they are, in spite of a faulty script, they're at least able minimize the monotony in the film. Pia Trivedi not only looks smoking hot but also manages a decent act!

Overall, there's nothing going for Hum Tum Shabana. It's yet another disaster by Sagar Ballary. Avoid wasting your money on this senseless flick!