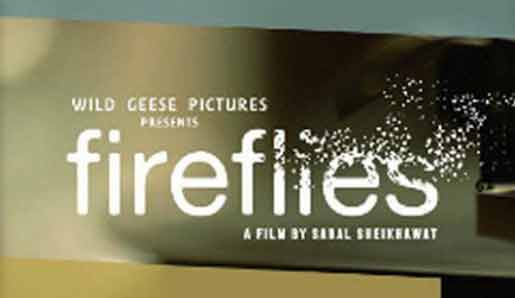 Things fall apart, the centre cannot hold, and a tear-dimmed tide is unleashed on the characters of this intimate character-study.

"Fireflies" is a well-intentioned 'Indie' film with a very clear-cut target audience.

Admittedly there is an inherent pretentiousness attached to an Indian film where the characters, no matter how urbane, speak only in English. Even the songs in "Fireflies" are in English. That's like a sonata in Sonepur Mela.

Nonetheless there is a fascinating undercurrent of sensuality to the proceedings -- crimson-red wine clinking in crystal glasses, diamonds rustling against silken saris, the rain splattering against highe-rise windowpanes to accentuate the pain...all of this compounded by a very good-looking cast that seems to intuitively grasp the nature of the goings-on.

"Fireflies" is like chapters out of a dreamily-written half-finished novels about incomplete lives.

It's the story of two incompatible brothers Shiv and Rana whose lives seem to run on parallel tracks. As played by Rahul Khanna and Arjun Mathur these two brothers could be long-distance cousins of Shashi Kapoor and Amitabh Bachchan in "Deewaar". Except that the script here lacks the commercial expanse of those masala epics on brotherly battles.

"Fireflies" is an elegantly-cut nugget about sibling bonding and an unspeakable family tragedy. Playing warring brothers, Rahul and Arjun are fluently frictional, frequently intense and constantly in character.

Wonder what stops Arjun from gaining greater glory in our cinema!

Oh yes, this is a fetching film with some striking interesting female actors playing troubled characters who remind us that sex relationships fall apart. Family stays.

If you like watching cinema on disintegrating relationships watch this one. It doesn't disappoint.

The characters are mostly shot in dark hues suggesting the deep suppressed longing that they are unable to express adequately in words. The stilted dialogues could be rationalised to that extent.

While Rahul gets into a doomed extra-marital relationship with a former sweetheart Aila (Shivani Ghai, quite a find), his brother's relationship too heads fast to a deadend.

Cinematographer Shankar Raman shoots the Arjun-Monica relationship in the non-judgemental bustle of Bangkok creating in the alien environment a feeling of emotional panic barely concealed because...well, strangers are looking.

It all comes together at the end not too satisfactorily. In spite of a very week end-game, the plot of "Fireflies" secretes enough intrigue and mystery to keep us watching. It may not be the greatest of drama on the conundrum of human relationships, but debutant director Sabal Singh Shekhawat gets the mood, tempo and characterisations right most of the time.

"Fireflies" is an imperfect film about flawed characters who disguise their spiritual ennui in tailored postures of sophistication. It's not a great film. But it's sincere and a largely well-crafted piece of cinema about fractured lives frozen in compromised relationships.