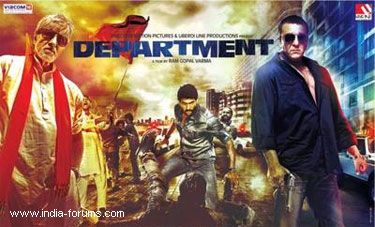 Shoot at sight. Point blank. In different ways that's exactly what Ram Gopal Varma (RGV) and his characters do in 'Department'.

While his cop heroes Sanjay Dutt, Rana Daggubati and their hazily sketched compatriots (one of whom looks like Deepak Tijori) go on a cleansing rampage against socio-paths, RGV goes on his own trip, shooting characters at angles you've never seen them being shot. They don't always look fetching with their stained teeth and dirty nails showing up in embarrassing close-ups. So, who said life in cinema is about postcard pictures?

Welcome to RGV's world of muck and mayhem.

The one definite thing that must be said about RGV is that his exploration of the nexus between the law and the underworld is ceaselessly seeking new modes of storytelling.

'Department' is one breathless surge of aggression and violence. Shot with cameras that capture the actors at their quirkiest and most candid, the film is not for those who think cinema is all about style. RGV left his stylish days behind in 'Rangeela' and 'Company'. 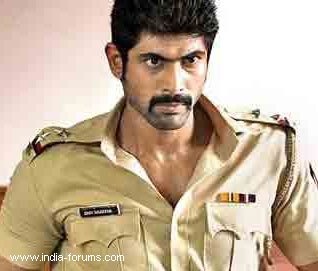 Repeatedly and mercilessly RGV dismantles all conventions of pretty storytelling and aims for the jugular. The camera angles are often much too casual to be considered 'cinematic'. But breaking rules is a given in RGV's cinema. He breaks them in 'Department' in a noisy rush of agitated images that go well with the edgy fidgety characters.

Not all the characters work. Vijay Raaz as a whiny dhoti-clad gangster and debutant Madhu Malini as a tartish sharp-shooter are a scream. The talented Abhimanyu Singh has a tough time trying to maintain an equilibrium between the two unintentionally comical evil doers. The dialogues these gangsters exchange try so hard to be real they end up being howlers. It's like eavesdropping on a conversation between two pathologists.

The camera, manned by no official Director Of Photography (and it shows), goes through the character's legs, into their nostrils, over their armpits...in this film about cops who do their own thing.

'Department' is a brutal film. There's no room here for emotions. Even when Sanjay Dutt playing a senior cop goes home his wife, played by Laxmi Manchu, speaking in a strangely loud tone, he talks to her in unsentimental tones. There's more feeling in the two cops, Sanjay and Rana's buddy-buddy talk, in the line of duty.

There's a long history in cinema of cops striking a rapport on the beat. Sanjay and Rana are no Danny Glover and Mel Gibson. But then this is no 'Lethal Weapon'.

The action here is a strange mix of street aggression and stylized stunts. While scenes of Rana chasing goons through claustrophobic crowded areas of Mumbai are vintage Varma, the climactic fist-to-fist between Rana and Sanjay proves a battle of unequal titans. One of the two actors being just too agile for the other.

What grabs your attention in this oft-told tale of the cops resorting to extra-constitutional means to 'cleanse' the city is the frenetic pacing. The characters are constantly on the move.

Even Amitabh Bachchan, while taking sardonic jibes at a 'system' that is corroded, is seen restlessly circling Sanjay or Rana, depending on which of the two the wily wizened politicians is provoked into action.

Not surprisingly Amitabh's netagiri provides the liveliest interludes in the proceedings. He seems to behaving the most fun even when saddled with dialogues that must have sounded far funnier on paper than they do in their delivery. Among the rest of the cast, Rana with his restrained ruggedness stands tall.

What 'Department' delivers is yet another RGV product that takes Hindi cinema's crime genre away from conventional storytelling. There are no punctuations except exclamation marks, no speed-breakers except songs, which are terribly screechy and grating with Nathalia Kaur's item number hitting rock-bottom, and no way out for these restless law-enforcers than to take the law in their own hands.

The world of 'Department' is anarchic, destructive and apocalyptic. The narrative format imposed on the world of gangsterism is freewheeling almost chaotic. Violence and death are written into the DNA of the characters.

'Department' tells a virile story with no patience for sappy humbug. It's not meant for those who think lovers laughing their way into death, as they did in 'Ishaqzaade', are the last words in ruinous relationships. In 'Department', the characters share a far more intimate bonding with their guns than with their friends