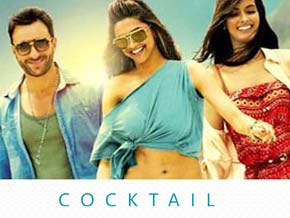 Out of the three protagonists in this wacky menage a trois, two people are not as beautiful inside as they are from the outside.

Gautam and Veronica are deeply flawed characters. He, a certifiable jerk who thinks of women , good times and partying, in that order, all the time. She, Veronica quite like her namesa e in the Archies comics, is a sexy, naughty, loud siren But then what happens when the party ends? What happens when the constant search for that elusive state of being known as Good Times bores you to death?

Veronica soon finds out. In painful revelations of the darkness under the neon.

It's a dream role for any actress.And Deepika Padukone, 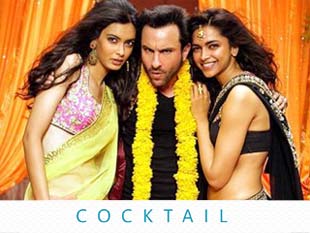 facing the biggest challenge of her career, sinks her beautiful teeth into the role with the hunger of a tamed tigress who has been let loose in a jungle for just one romp. She gets out of her comfort zone and lets the mascara run down her distraught face with a couldn't-care-less gusto that glamour girls don't generally adopt. It's a performance to be admired.

In truth, Deepika would have been far more comfortable playing the butter-won't-melt-in-the-mouth Meera (a hugely impressive debutante Diane Penty). Deepika has apparently chosen to play the fun-loving bitch who somewhere down the line, realises she wants all the things that he had so far scoffed at.

Not surprisingly, the film is written by Imtiaz Ali in whose "Socha Na Tha" and "Love Aaj Kal" we met the commitment-phobic hero. In fact, there is really no difference between Saif Ali Khan in "Love Aaj Kal" and in "Cocktail". Except that the womanizer in the new avatar makes a lot more faces. Experience makes for expressiveness. They both shun true love when it stares them in the face. And then of course, the rest that follows is predictable. 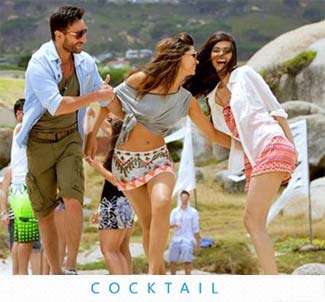 "Cocktail" is not high on surprises. The two main characters are prematurely jaded, bored out of their wits by an excess of hedonism. Into their lives arrives the timid golden-hearted jilted bride who needs a home and a place to call her own. The film is really about three unmoored characters finding their bearings. That it has been shot in London is a happy circumstance for the characters. Cinematographer Anil Mehta makes them look ravishing in their rain-washed lives with glimmers of sunshine peeping out in tantalizing scoops.

Unfortunately Saif silhouetted against the London's quaint bustle is a bit of a cliche. He brings nothing new to his role, and he isn't entirely to be blamed for it. Saif's is a thankless part. He moves in with the vixen Veronica where Meera is already ensconced after being deserted by her caddish NRI husband (Randeep Hooda, struggling to impart substance to his wafer-thin role).

By the time the triangle concludes everyone is in love with Meera. Audience included. Diana as the angelic girl from Delhi who is left bereft on foreign shores (many shades from Aishwarya Rai's Aa Ab Laut Chalen) is the discovery of the year. She stops her Good Girl's role from becoming sickeningly sugary. And that's no small achievement for a newcomer.

"Cocktail" is not quite as intoxicating as it sounds. But it's a heady brew about beautiful people trying to find themselves in places where life is an endless party.The music is effective in conveying the pseudo-euphoria of people who drown their solitude in noise. Saif is likeable when he doesn't try too hard to be the roving-eyed rogue. His performance in drag to "Sheila ki jawaani" is brave.The performance on the whole is more smug than brave.

Boman Irani and Dimple Kapadia playing siblings are brilliant, specially the former who seems incapable of giving an under-done or over-done performance. Like Deepika, Dimple is remarkable for getting out of her comfort zone and doing a role that would traditionally go to Kirron Kher.

Deepika and Diane are gorgeous in their respective spaces. "Cocktail" is a very good-looking film about people who constantly seek a good time and then realise what they thought to fun was a farce. The emotional transitions are achieved with a fair degree of smoothness. You kind of grow to like all three protagonists, blemishes and all.

Director Homi Adjania who made the eccentric "Being Cyrus" shows a casual familiarity with the realm of the rom-com. He takes the basic ingredients of the genre and plays around with the components, to emerge with a concoction that is quite appealing in its self-deprecating humour and a rather unusual appetite for partying.