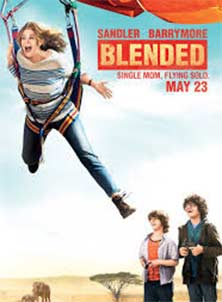 After a bout of techno-savvy films in the last few weeks, "Blended" is a welcome delight. A frothy, light summer family entertainer, it keeps you in splits with constant gags and cheeky one-liners, along with slapstick and situational dramedy.

The story as you may have envisaged by the trailers as well as the title, clearly indicates that it is a repeat of "Yours, Mine and Ours" or near home, the Ashok Kumar and Pearl Padamasee-starrer "Khatta Meetha". For the uninitiated, it is the story of dynamics between two families with single parents and how they blend to become one.

The film begins with a disastrous blind date between the widowed Jim (Adam Sandler) and divorcee Lauren (Drew Barrymore). They have never been on a date other than with their respective spouses. The awkwardness of the situation further gets emphasized due to guilt pangs they suffer; their loyalty to their children.

After the date, the two swear not to see each other, but circumstances throw them together and after a complicated and elaborate set-up they end up, along with their families on a vacation, "The 4th Annual Blended Familymoon", at Sun City Resort in South Africa.

Once in Africa, the outcome is inevitably predictable. The narration is formulaic, but what keeps us glued are the sparkling tongue-in-cheek dialogues and the sweet non-taxing humour which at times is semi-convincing, yet laudable.

Scriptwriters Ivan Menchell and Clare Sera have well-etched the emotional arc of each character and ensured that the various filler additions in the sub-plots are well integrated into the mainstream story.

Compared to his previous films, Sandler portrays Jim with sincerity. He injects the typically male sloppiness, as the single dad bringing up his three daughters, in a positive sense that the audience can identify with and accept Jim's idiosyncrasies and fallacies.

Barrymore on the other hand, shuttles from the loud boisterous single mother to the loving, caring and nurturing mother figure, Lauren, with equal grace. There is a distinct naturalness in the chemistry she shares with Sandler.

The kids too, have a fair share of the screen time to shine. They effortlessly get into the skin of the characters they portrayed and leave a lasting impression.

Of the smaller roles, Kevin Nealon as Eddy and Jessica Lowe as his buxom tarty partner in a randy role stand out, so does Terry Crews as Nickens, the muscle flexing South African lounge singer and Abdoulaye N'Gom's hotel activities manager. They add the forced laughter elements.

On the technical front, the production quality is of good standard. The photography by Julio Macat has a mixed blend of exciting visuals. Some of the images capture the moments with gusto. The wildlife as well as the adventure shots seems to be promoting South Africa in a big way as a sanctuary and a holiday destination.

Unfortunately, the edits are a bit jerky, but those could be overlooked with the spirit of the flow.