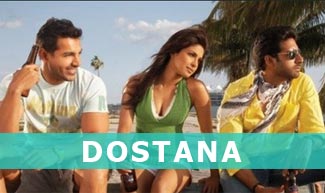 Featured Video
ed by Tarun Manshukani will be starring John Abraham, Abhishek Bachchan, Priyanka Chopra and Bobby Deol in a special appearance. To add up spice Shilpa Shetty will be performing a sizzling item number along with the two actors in this film. The movie is said to be a love story with a twist in the tale like never seen before. It's not a love triangle like the previous Dostana. Promising to be funny, sassy and hilarious, the film is about the friendship shared by two guys played by John Abraham and Abhishek Bachchan. The roles of these two actors are said to be quite unique in this urban comedy. Shot in Miami, Dostana's promos are already creating waves as the film is all set to release on 14th. November! Are you waiting for this film? What are your expectations? Share with us....