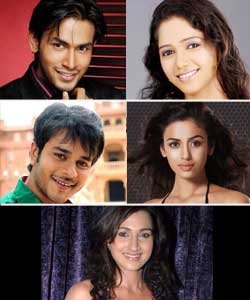 Barely three days left for Imagine TV's Nach Le Ve with Saroj Khan to go on floors and the list of contestants doesn't seem to end.Renowned names like Pooja Kanwal and Jay Soni are amongst the new lot who will join the bandwagon. "Yes, I am doing the show and will be competing against Preeti Amin," states Pooja Kanwal Mahtani.

Our industry khabroo spills a few more names who have been chosen to compete on the show. "Yashashri Masurkar of Rang Badalti Odhani, Pooja Kanwal Mahtani and Jay Soni of Sasural Genda Phool, Naman Shaw who is currently seen in Beend Banoongaa Ghodi Chadhunga and Prerna Wanvari will be seen shaking a leg," says the source.

We tried contacting Naman Shaw but he remained unavailable for his comments.

Woah that's an impressive bunch! Looks like the channel is going out of its way to make sure the viewers have a great time...

Malaika Arora trolled for her stretch marks, fans defend with a classy ...

8 years ago In Nach le ve Ur dance was awesome & u looking geautiful.gorgeous...

+ 3
8 years ago love you yashashri...come back soon

+ 2
9 years ago m eagerly waiting for this show...especially for Yashashri's performance

9 years ago all the best yashu ..happy for u ...just cant wait too see u dance

truecolor08 9 years ago All the very best Yashashri M! Give it ur best. &lt;3