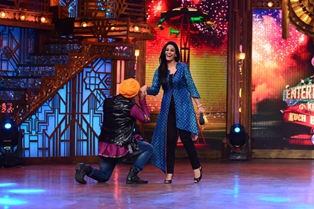 "Will you marry me Mona?" resonated on the sets of Sony TV's Entertainment Ke Liye Kuch Bhi Karega as a contestant went down on his knees and proposed to the vibratious host, much to her surprise. To know the complete story, read on.

The host of EKLKBK Mona Singh was in for a surprise when contestant Roshan from Gujarat, a die-hard fan of the beautiful host proposed marriage to her. Roshan is a big fan of Mona Singh and when he came face to face with her he couldn't control his emotions. He went down on his knees and said, "Will you marry me Mona?" He even sang a song for her. He later revealed that the song was one of his self-compositions.