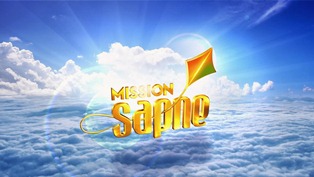 Sunday 8 pm to 9 pm on Colors
Produced by - Smruti Shinde, Vikas Gulati
What is it all about -
The show is about celebrities taking over simple duties of a common man for a day to earn money for the cause of a person in need. The show which is all for a social issue encourages these celebrities to work and toil to earn the hard earned money and the day's income is multiplied 100 times which is then given to the needy.
The first episode saw Bollywood heartthrob Ranbir Kapoor taking it upon himself to earn money for the treatment of a 10 year old girl Sunita Ingle who is suffering from blood cancer and undergoing chemotherapy. The star turned into a wada pav vendor and with his charm managed to not only sell a good amount of wada pavs also got people to donate money on the spot.
At the end of the episode his earnings minus the investment in resources were multiplied 100 times and a cheque of Rs. 7,67,000 was presented to Sunita's parents.
In the upcoming episodes celebrities like Salman Khan, Varun Dhawan, Harbhajan Singh, Mika Singh, Ram Kapoor, Drashti Dhami, Ronit Roy, Karan Johar, Sidharth Malhotra will be seen working for a good cause.
What works -
The show obviously is for a social cause but it has managed to blend in the entertainment factor very well into the format. The celebrity is the added attraction whether he is out there earning money or to get the audience hooked on to the show. Just like in Ranbir's case we are sure in the upcoming episodes too for the fans to see their favorite star in flesh and blood doing something down to earth will be entertaining. To get to see the actor and touch and feel him, getting pictures clicked and take autographs is something that will work for all - the person in need, for the fans and also for the actor who will get more fan following. 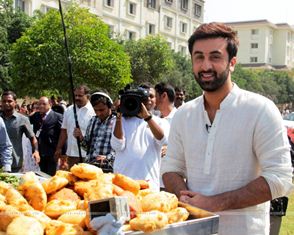 Sonali Bendre as the anchor has a pleasant personality and conducts the show well. That she is a matured woman with a balanced personality helps when she talks about the people in need and has a connect with the viewers.
What does not work -
Nothing much but the expenses for the helicopter ride for Ranbir to get to Pune was avoidable. That money too could have put to a good cause. There was no reason for Ranbir to go to Pune to sell wada pav and if it was done at any nook and corner he would have drawn as much crowd.
There should be a follow up episode to ensure that the money reached the correct hands and that it is used for the right purposes but then that might need another show altogether.
Our take -
The show is obviously for a good cause and touches your heart. This particular episode about the girl with cancer tugged at your heart strings making you want to give out more if you could when they showed what the patient and the family was going through for the treatment. There must be many others who are equally needy and it would be good to see if the show which is at present supposed to be for 10 weeks with 10 celebrities only going in for more episodes.
Seema Khot Mattoo
209 Likes

zindagimaaneet 6 years ago GEET DRASHTI DHAMI you are great...
Waiting for your MS episode...
Love you angel Drashti Dhami...

Maankhurana786 6 years ago GEET DRASHTI DHAMI you are the best..
waiting for your MS episode..
Love you doll Drashti Dhami...

rebba 6 years ago Drasthi dhami proud ur a part of such noble cause.luv uuu

ginnynharry 6 years ago Drashti Dhami, good morning, hope your Saturday is coming along well. Want to know when your episode of MS will be aired.

samantsanjay 6 years ago Drashti Dhami, all I wish for is to see you in MS&gt;

darshantailors 6 years ago Drashti Dhami, good morning, have a super weekend. Eager to see you doing your bit in MS.

anabiya 6 years ago Drashti Dhami, it's really sad how the CVs have once again overlooked the heroine track. So am only looking forward to see you in MS.