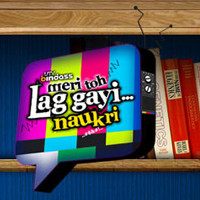 UTV Bindass started off with its new experimental show titled Meri Toh lay Gayi Naukari, produced by D J's Creative Unit, starring Priyanka Chibber and other well known actors just a month back. But the buzz is that the show has stopped its telecast abruptly.

A source says, "Yes, the show has been called off. There were some issues between the Production House and the channel which lead to the abrupt closure of the show."

We also hear that if everything falls in place, the channel will be coming up with Meri Toh Lag Gayi Naukari Season 2. But for now, the channel has called off the show.

"There were some new entries expected in the show which was getting delayed and finally, last week, the Production House had to take the decision of axing the show, "signs off source.

We tried hard to get in touch with Diya Singh, the Producer of the show, but all our efforts were in vain.

We contacted Priyanka Chibber who essayed a meaty role in the show and she confirmed, "Yes, the show has gone off air due to some reasons, but it was a fine experiment with the show."

Clearing the clouds from the reason, she states, "The show had a format that restricted the telecast to a few episodes."

Hope the second season does well on the channel…

9 years ago I have not seen it much but whenever I saw the show it has some extremely abusive languages & indications to men & woman's private part which ruined my interest
For example:A girl says to a gay fashion designer-"apna banana toh kaam hehi karta mere aam ke piche parahai!!!"
I MEAN HOW CHEAP & TASTELESS IS THAT???

peehu.vg 9 years ago thank god ... i really am thankful it was the worst show on indian television ever ... like ever ... dnt bellieve it came from dj's ... who make such fyne shows like just mohabbat and jassi ... anyways ... hopefully bindaas will have more sense and come up with a better show ...

+ 6
9 years ago DJ's have always had issues with something or the other. Feel sad for the actors