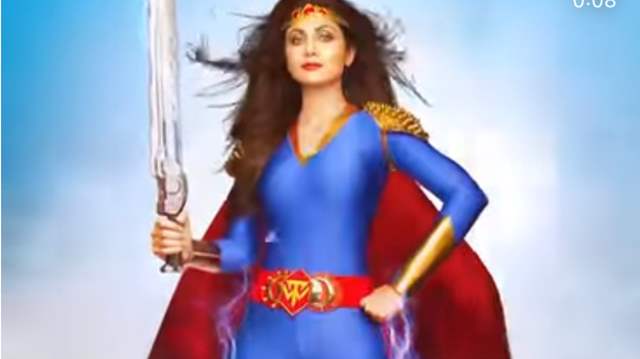 Last week, Bollywood's leading superstar Shilpa Shetty announced that she would be taking a break from social media and its monotony. And just when netizens were beginning to miss her lively social media presence, Shilpa is back with a bang!

She has now announced her comeback on social media along with the trailer of her big screen comeback, Nikamma - with a sparkly new avatar no less! And if the teaser announcement is anything to go by, what a comeback it's going to be indeed!

The teaser video sees a caricature Shilpa Shetty in a Wonder Woman avatar with electricity coursing through her and a sword in hand. Posting to her social media and announcing Nikamma's trailer release on 17 May, she wrote, "Now we're talking 😉 In a brand new avatar! Who is the REAL ‘AVNI’???!! Do show some love😉 & watch this space for more♥️

(Sound On🔊) Remember tomorrow 17th May, launching the NIKAMMA trailer at

Sabbir Khan directed Nikamma, which features Shilpa in the role of Avni, is quite different from the characters she has previously played. The film is produced by Sabbir Khan Films and Sony Pictures International Productions, and it stars Abhimanyu Dassani and Shirley Setia in key roles.

Shilpa Shetty returns to the big screen after a 14-year absence with Nikamma. Fans have been waiting to watch their favourite superstar on the big screen and now, finally they will get to catch a glimpse of all the Nikamma action!

+ 11
1 months ago since when is shilpa a megastar lol