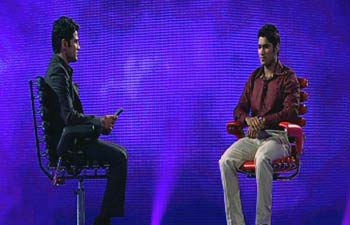 Raj Thakur from Meerut won Rs.5 million on "Sach Ka Saamna", the first contestant to do so on the controversial show.

A fitness trainer and an ex-Merchant Navy officer, Thakur did not hold back and truly answered all questions asked on the show, hosted by actor Rajeev Khandelwal.

He was asked questions like "Have you ever locked your teacher in the bathroom", "Have you seen pornographic DVDs and magazines on the ship", "As an officer in Merchant Navy, have you ever accepted bribes and also smuggled oil from other countries?"

But he took them head on.

"I have accepted my mistakes very positively. After all, I went there (on the show) to confess the bitter truth of my life. Victory and failure is all part of life. My family is very supportive and encouraged me to play further and my heart said I must not quit, so I played," said Thakur.

Thakur is the youngest child of a policeman and brother of a politician. Little did his family members imagine the extent to which "the baby of the family" was breaking rules in their own home.

The episode featuring Thakur will be aired over the weekend on Life OK.

"Sach Ka Saamna", based on the American show "The Moment of Truth", features contestants who answers questions about their personal lives. A polygraph determines whether their answers are true or false.

+ 4
8 years ago wow that was one truthful men, rajeev you are truly an awesome host you not only take care of your participant but also encourage them i have a positive view towards your show and best of lyck, i want a 3rd season too

+ 2
8 years ago its a fixed show , if somebody says i didnot stole still the polygraph tests says yeh such nahin hai !!!

8 years ago Useless serial for useless people...yeah then why am I commenting because I want to comment on this disgusting serial