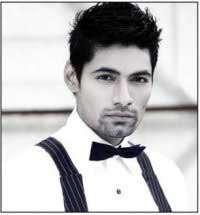 Though all the actors have been introduced with a new flavor it's just Nirbhay Awasthi aka Meer Ali's character which has been sketched out on a somewhat similar lines to that of Mayank aka Arjun Bijlani's earlier personality on the show.

When contacted, Meer Ali in a tone of acceptance asserted, " Yes my character is an edge over Mayank's initial role on the show like he is intelligent, good at studies but the personality of Nirbhay is physically and mentally more strong and sorted out. Though he hails from a small town of Muradabad yet portrays a very sharp tone in his talks and carries lot of positive attitude."

Highlighting his character difference through his physical appearance he said, "I carry an indo-western look in the show, a Lakhnavi kurta, denim jeans and special kind of shoes."

When inquired about the pressure he feels from previous actors of the show he said, "Yes the show has acquired lot of fame and audience have a great attachment to the previous stars but we new comers are also putting in lot of efforts and hope people like that too."

-sam- 10 years ago mayank is Mayank,
no comparison
Love Mayur....

Jiyyaa 10 years ago
@At Sajanians...Why u commeting u want Sajan here???

MeerAli 10 years ago
Hi Guys,
This is Meer, playin Nirbhay in (MJHT).
I'm sorry for hurtin all u ppls sentiments. Truly tht was not my intention.Definitely I have a lot to learn from Mayank n others frm d cast.. I knw tht they are the demigods of the show . I promise, Wont upset you ppl again and will keep up to ur expectations. Expecting lot of love frm u all.