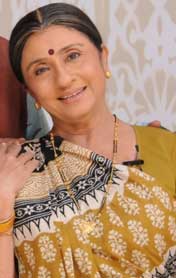 Meenal Patel who essays the role of Kesarba, that is I.M. Virani's mother in Colors' Mukti Bandhan will now be seen in yet another interesting role in Imagine's upcoming show, Haar Jeet. The show produced by Shashi and Sumeet Mittal is the tale of two little girls hailing from different financial backgrounds, who are forced by their parents to fulfill their dreams.

Our source states, "Meenal Patel has been roped in to play the dadi of the rich girl, essayed by Jannat Zubair Rahmani".

When contacted, Meenalji told TellyBuzz, "I can only talk about it after I finalize my talks with them".

We also hear that Akanksha Awasthi who is seen in Uttaran and Beend Banoongaa Ghodi Chadhunga will also play a pivotal role. She essays the unmarried bua of the poor girl, played by a new face.

When contacted, Akanksha said, "Nothing is finalized yet".

The promos of Haar Jeet are on air, and the show is scheduled for launch in September.

dynamic_doll 9 years ago luv her as Baa in Mukti Bandhan...all the best for ur new show but plz don't leave MB!

LimitLessFan 9 years ago OMG. Jannat is rocking ... true talent never sits without work, but give the gal a break yaar. oh ho poor and rich kids ???? hope it wont become another downmarket show like Uttaran
Meenal and Jannat , all the best

Girl_2007 11 years ago Tusshar and she make a nice couple onscreen
and i dont think it will be a flop film BTW :)

-Preeti- 11 years ago Prachi would look good opp Tushaar ....Rimi would look elder to him

wish the actors all the best for the movie

bwoodlover01 11 years ago im going to see LP only for Prachi- Her character was really small in Rock On I felt, so I wanna see her more in this movie! Along with reel, I hv a feeling these two will hook up in real life too...

cookie09 11 years ago they look good together .. very simple and real people... prachi is definiately better choice than rimi . she is so graceful, freshlooking and talented. Rimi is not that bad but sometimes overacts and too loud...