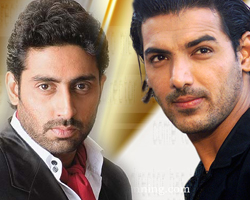 The cast and crew of Karan Johar's 'Dostana' are having a whale of a time in Miami. Since it's a seaside comedy about two guys, Abhishek and John Abraham, and the girl Priyanka Chopra, whom they woo, everyone is having a party on the job. Says Priyanka from Miami, "After shooting non-stop for the serious and dramatic 'Fashion' with Madhur Bhandarkar in Mumbai this is just the break I needed. Not that we aren't working hard. We have to complete the schedule by mid-May so we're working till late evening and starting early in the morning. But it's a very funny film. And Abhishek and John are friends first, co-stars later." Abhishek's better-half, Aishwarya, and John's girl, Bipasha, are expected to join the masti in Miami shortly. Priyanka, sadly, will have to be without the love of her life. Harman Baweja is working fast and furiously on his debut film 'Love Story 2050' back home.
By Subhas K Jha
-(SAMPURN)
Featured Video