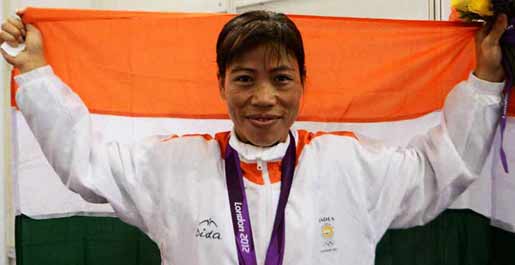 Indian Olympic medallist boxer M.C. Mary Kom has pipped late prime minister Indira Gandhi as the 'Most inspirational mother who made a difference to the world', according to a survey released on the occasion of Mother's Day on Sunday.

The survey by online matchmaking platform Shaadi.com was conducted to find out about globally the most inspirational mothers in India and Britain. The results are based on an online poll, which received over 9,700 responses from Indian women.

When asked about the 'mothers from India who made a difference to the world', 39.1 percent of the respondents said Mary Kom, followed by Aishwarya Rai Bachchan (32.4 percent) and Indira Gandhi (28.5 percent).

Commenting on the survey, Gourav Rakshit, COO, Shaadi.com, said: "The survey showcases some of the most successful mothers whose determination to make a difference, has inspired the world. It is very encouraging to know that people are not just looking up to them as celebrities, but also as real people with real relationships."