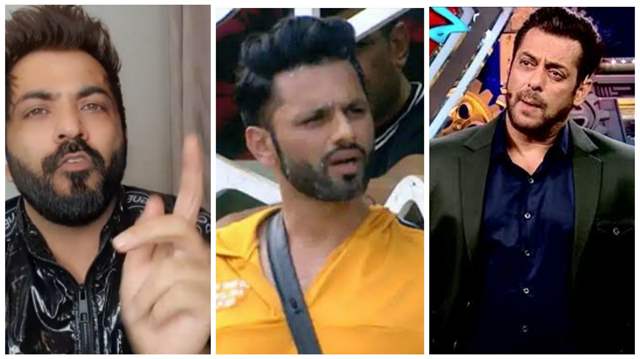 This past Weekend Ka Vaar episode witnessed a rather unexpected clash between none other than Salman Khan and contestant Rahul Vaidya. When the latter requested the former to not label him as a 'bhagoda' when he voluntarily quit the show earlier.

Since his comeback, Khan has been labeling him as a bhagoda at times seriously and at times in a joke or so. When Vaidya requested Khan to not call him that, Khan went on to slam Vaidya and even asked him to not reverse it on him.

While Khan said what he said, Manu Punjabi, who has been out of the show for a few days now owing to health issues actually countered Khan's comments and even said that he respects Vaidya's decision to do that.

Punjabi said, “Wo mahaan hai, uske andar ye quality hai ki wo itne bade manch ko chhodkar apne dil ki ek awaaz sunkar wahaa se jaane ke liye keh raha hai. Aur wo apni chaahe girlfriend se, ya apni maa se milna chaah raha hai, aur unko zyada importance de raha hai, toh meri nazar me wo zyada value rakhti hai. (I think he is great. He quit such a huge opportunity and show and just did that listening to his heart. Whether he met his girlfriend, his mother or anyone - if he has giving them importance then those things matter to me more than anything else."

Many have had mixed opinions about Vaidya's decision to leave and then come back.