New Delhi, Sep 18 (IANS) 'Manorama Six Feet Under' is debutant director Navdeep Singh's homage to the 'noir' genre. Releasing Friday, the film is about a small town amateur detective who finds himself caught in a web of lies, deceit and murder. 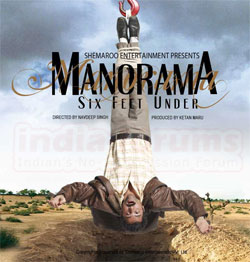 Others with him in the film are Raima Sen, Gul Panag and Sarika.

The film centres on Satyaveer Singh, fondly called SV (Abhay), a qualified engineer whose real ambition is writing detective fiction. Unfortunately, his maiden attempt, a novel called 'Manorama', flops and he is reduced to writing for a cheap pulp magazine.

SV is stifled by the dreariness of small town existence and frustrated by his failure. But an interesting turn comes in his life. The wife of a powerful local politician arrives at his doorstep with an irresistible offer - the chance of playing a real life detective and spying on her husband.

SV accepts the case and solves it too. But the situation takes an unusual turn when he completes the assignment and discovers that the woman is not who she claims to be.

The story gets complicated when she is killed in a mysterious accident. Sensing foul play, SV begins investigating her death, only to discover that nothing in life is what it seems and that redemption doesn't come easy.

Though the director is new, the plot is intriguing and interesting, and Abhay is a good actor, so one can look forward to the movie.