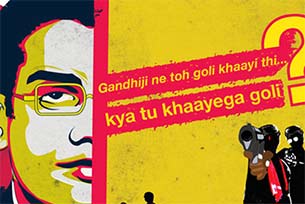 Sasho Satiiysh Sarathy, whose performance as Manjunath Shanmugam has been widely appreciated for being realistic, says essaying the slain Indian Oil excecutive on the big screen drama "Manjunath", has been a life-changing experience for him.

"Manjunath", directed by Sandeep Varma, is a biopic on IIM graduate Manjunath Shanmugham, who took on the fuel mafia in 2005, raised his voice against corruption and who was murdered.

In an interview, actor Sasho has spoken out about how he tackled the role for the film, his experiences, and his future plans in the field of acting.

Q. That doesn't look like a performance at all?

A. Thank you for saying that. It is my debut performance and the fact that I played a man so inspiring has left me deeply influenced.

Q. You had no experience in acting?

A. I had done an acting course and I perform at corporate events. But I had to unlearn all that I knew about acting and start from scratch to understand the mind and heart of Manjunath. My director Sandeep Varma guided me into the character. He saw me at a corporate show. He had done my auditions so many times. He told me to fly down to Mumbai from Chennai where I live. Only then was I finalized.

Q. What was the main requirement from you ?

Q. Manjunath's idealism and his determination to live his life with honesty seems to have touched people's hearts?

A. This is the impact we wanted. And we're so glad that people have responded to the character and the film like a wake-up call for conscience. After seeing the film, my mother and friends were in tears. When they told me they were moved, I felt it was a job well done.

Q. Manjunath is shown to share a very special bonding with his parents. How about you?

A. Unfortunately, my father passed away during the making of this film. He couldn't live to see my film. I so badly wanted to show him my film. He was instrumental in my change of career. He persuaded me to do my MBA and then when I showed a keen interest in pursuing an acting career, he allowed me to go ahead with my other career option. It took me a while to find the right acting vehicle. Now that I've found it he isn't here to see me in my chosen vocation.

Q. Seema Biswas, who plays your mother, seems so in character?

A. Yes, my real mother completely empathized with me. Seemaji and Yashpal Sharma sir were my two pillars of strength on the sets. They never made me feel like a newcomer. They guided me all the way.

Q. How did you approach Manjunath's role?

A. When we started shooting, we didn't have any reference points for Manjunath. We only had his family and friends to give us an indication of what Manjunath was like. We did three months of rehearsals to create the character's reality. Director Sandeep Varma made me abandon all my flamboyant ideas of acting. Seemaji and Yashpal Sir helped me a lot in getting the rhythm right. Sandeep sir (my director) instructed me to hold my own before these acting giants. I'd be lying if I said I wasn't nervous sharing the screen with such stalwarts .

Q. Do you now intend to pursue an acting career?

A. I speak eight languages, including my native tongue Telugu, Tamil and Hindi and English. I want to act in all the languages. Acting is my calling.

Q. What kind of roles do you see yourself doing in future?

A. The roles will have to choose me, and not vice versa. As an actor, I'd like to do as many kinds of roles as possible. But Manjunath will stay with me forever. I got into the character not knowing what he was all about. Once I got into Manjunath's skin I couldn't leave him behind. It has been an emotionally traumatic but ultimately very satisfying experience. I'm a changed human being. I can't even see the road littered without cringing. Manjunath Shanguman has changed my life forever.

Q. For the girls who have fallen in love with your idealism... are you single?

A. No, I am married. My wife flies with the cabin crew in Air India. She was more nervous about the release of Manjunath than me.