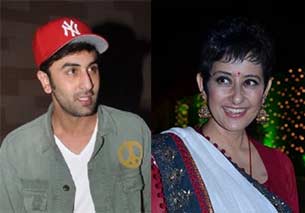 Actress Manisha Koirala, who has worked with Bollywood's big stars, including Salman Khan, Shah Rukh Khan and Aamir Khan, is impressed by the younger talent and says she finds Ranbir Kapoor fit to play her brother on screen.

"I have been seeing Ranbir Kapoor, and I think he is brilliant. I think he can do my younger brother's role," the 43-year-old told IANS during a chat on the sidelines of a recently held event here.

"In actresses, there are so many. From Anushka Sharma, Parineeti Chopra, Sonakshi Sinha to Sonam Kapoor...everyone is so competitive," said the actress, who has successfully battled cancer.

On the big screen, she was last seen in "Bhoot Returns".