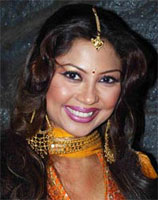 Talking about her episodic, Maninee says, "I am playing the character of a television super star Sashi Bindu, who has come to judge the dance competition. Basically I am a woman who salutes 'Woman Power'".

On working with Hats Off Productions, the actor states, "It is always a pleasure working with Aatish and JD. Their characters are so powerful and beautifully sketched that as artists, we fall in love with them".

Well, it will be a treat to watch Maninee in the cameo!!

+ 6
12 years ago thanks
well i would like to see her in some full fledged role too ...this seems like a cameo