Zee TV's Shree, produced by Hats Off Production will see major drama, some intense fight sequences never witnessed before on Indian television, in the coming episodes. 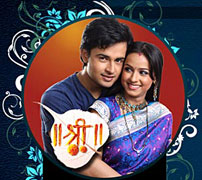 Featured Video
As the Raghuvanshi family gears up for the wedding of Bindiya and Hari, Kangana who is in Bindiya's body throws a surprise at the entire family by taking them to the Purani Khoti.

According to our source, "The shoot for this special sequence at the Purani Khoti will kick-off from today at Naiga, where the sets of Sony's show Meet Mila De Rabba was erected earlier. The Raghuvanshi family get a shock when Bindiya brings them to the Purani Khoti. They are in fact surprised as nobody else knew about the existence of such a haveli. Meanwhile, Shree also comes to the Khoti to try and stop the wedding. She realizes that if the marriage happens, the entire family will be destroyed by Kangana, and eventually Kangana will not spare her cousin sister Bindiya too".

"Kangana brings in three other ghosts to the haveli, who come in the guise of Kangana's father, mother and pujari. The three characters have been given a different kind of look, and will appear very fictitious. There will be lot many graphical shots that will enthrall the audience in these episodes. Kangana will go on to create an invisible wall that separates Shree and the family members. With this, the family cannot see the presence of Shree in the haveli. Shree who can see them cannot talk to them, or go near them", further explains our source.

This track will also see Kangana appearing as a ghost for the first time before Hari and the family members. "Kangana now intends to destroy the entire family, and appears before Hari. Once Hari gets to know that this is Kangana, he refuses to marry. Kangana starts harming the family members one by one; she hurts the wheel-chair bound Tribhuvan,father of Hari. She also locks Darshan and Anant in their rooms and tortures them".

The high voltage sequences at the Purani Khoti will run for more than 120 minutes, and will be shown in six episodes, starting coming Thursday. "The highpoint of these episodes will be the awesome graphics that the production house has planned to give the audience. This will end in a huge action sequence to be shot between Kangana and Shree, with eventually Shree succeeding in saving her family and Hari from the clutches of Kangana", states our khabroo.

Well, the drama does not end here, as after this, viewers will finally witness the flashback wherein the mystery over Kangana's death will slowly unfold.

For now, audience can look forward to the six gripping episodes which will focus on the victory of good over evil...

love.story 13 years ago i completely agree wit you. my mom watches d show,so i hav 2 bear wit it. it is really stupid infact IT SUCKS!!!!!!too much of rubish on jadu tona. ALL CRAP. I HATE TIS SHOW. PLZ EVERYBODY STOP WATCHIN D TRP WIL GO DOWN N D TOCHURE WIL END

13 years ago Irritating and stupid show
I made a big mistake watching this show in the beginning
This is the worst show ever on the Indian television
Poor acting and poor cast...
The production house has gone out of their minds..can't just believe that this is the same pro house which produced wonderful shows in previous years.
What all crap are they showing in the show? How can a ghost stay for so long in a body? and does a ghost really have those powers....like a superhero???? I guess they should be limited. Also, a lot of crap is shown in terms of that bhoot bhagao magic and all that stuff

13 years ago i just want to know about the past..how kangana died....can't wait to see that..

Roja83 13 years ago heyyyyy can't wait for this episode to be aired..Finally Hari comes to know the truth!!

13 years ago wow cant wait to c the episodes , i want to knw as hew kangana died

13 years ago Whoa, a chick fight between Shree and Kangana... luuuv this show!