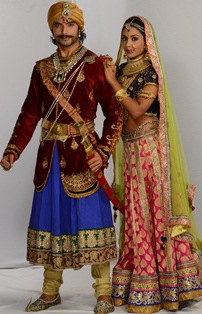 With the spellbinding twists and turns coming up, the show promises umpteen entertainment. Recently the main leads of the show namely Maharana Pratap aka Ssharad Malhotra and Ajabde aka Rachana Parulkar visited the pink city - Jaipur.

The twosome were seen having a gala time on their trip. Both Ssharad and Rachana were seen exploring Jaipur be it gorging on the famous delicacies of the city or the antic jewellery shopping. On the same elated Ssharad shares, "The pink city has its own charm be it the architecture, the attire or the authentic delicacies. It gives me immense pleasure to visit this royal city."

As it is said You can't leave Jaipur without 'Shopping', impressed Ssharad and Rachana made it a point to carry some Jaipur famous sweet dish Ghenwar and the beautiful Jutti's back home to Mumbai.

6 years ago love you Rachana Parulkar...you are heavenly gorgeous...

6 years ago Rachana Parulkar you are doing brilliantly as Ajabdeh...Keep rocking...

6 years ago You do a great job acting as AJABDE. Keep up the great work. Rachana Parulkar..luv u..gluck n all the best 2015

6 years ago Rachana Parulkar we love you tons sweetheart. You portray Ajabde effortlessly.

6 years ago Rachana Parulkar is just superb as Ajab de ...

6 years ago So sweet ...hoping you bought some lovely gifts for Divyanka.