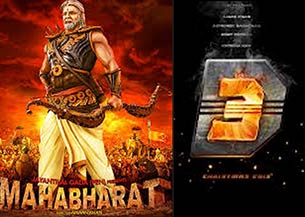 Released on about 150 screens Friday, the Amaan Khan directorial is said to be India's most expensive animated film.

Made on a budget of Rs.50 crore, minimal promotion was done for the 125-minute film, which is an outcome of seven years of hard work; the official statement says that the movie has collected Rs.1.5 crore in three days.

"The movie is not upto the mark. There are no concrete box office collection figures," Rajesh Thadani of Multimedia Combines told IANS.

Trade pundits are not expecting anything positive for the animated film as all eyes are still on "Dhoom: 3", which released Dec 20.

Seeing the performance of the animated film on the popular epic, it seems like animation movies are yet to be accepted by Indian audiences.

Delnaaz Irani speaks about entering Choti Sarrdarrni, her ...
29 minutes ago

Madhrima Tulli & Ssharad Malhotra starrer “Pasta” gets an ...
48 minutes ago