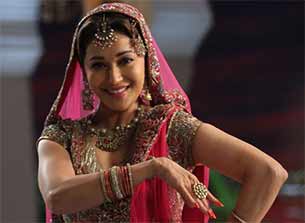 Actress Madhuri Dixit, who plays Begum Para, an attractive yet dangerous woman in "Dedh Ishqiya", says the various facets of the character attracted her the most.

"The best thing I liked about the role is that Begum Para is a multilayered character," Madhuri said here.

"What kind of woman Begum Para is, actually revealed at the end in the film," she added.

Directed by Abhishek Chaubey, who had helmed the original, "Dedh Ishqiya" is a romantic saga of individuals who are caught amidst love, compassion and deceit. The actress says the film has an entertainment quotient and hopes the audience enjoys watching the film as much as she did while shooting for it.

"As a film, as a product I would say the film is very entertaining. There is not even a single point in the film where the rhythm is missing...very tightly woven characters," the 46-year-old said.

"I enjoyed a lot shooting for the film and I hope audience also enjoy watching the film as much as I did while shooting," she added.

"Dedh Ishqiya" also features Huma Qureshi and it will hit the theatres Jan 10 next year.