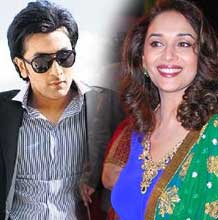 The current buzz is that Madhuri Dixit will be seen opposite Ranbir Kapoor in director Prakash Jha's next untitled venture. Mads has worked with Ranbir's father Rishi Kapoor years ago in 'Yaarana' and 'Prem Granth,' so she must be comfortable with the Kapoor family.

Bollywood's old trend has been pairing older men with younger girls.  Be it Rishi Kapoor in 'Deewani,' Big B in 'Suryanvansh,' or even recently SRK in 'Om Shanti Om' and 'Rab Ne Bana Di Jodi.'  These older male actors have shared sizzling chemistry with their younger female leads.  Will an older female actor be able to create on screen magic with a younger lead? Only time will tell.

But since Shahid Kapur and Vidya Balan and Ranbir Kapoor and Bipasha Basu have been successful on screen, we ask why not?!
Featured Video