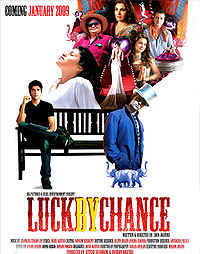 Featured Video
Sanjay Kapoor, Isha Sharvani  and in a very special appearance Hrithik Roshan. The music has been given again by the trio Shankar, Ehsaan and Loy while the lyrics are by Javed Akhtar.

Zoya, the film's director, has this to say about the music," I am really kicked with this album. I am an avid listener of music and have an extremely varied taste. I was extremely particular about getting the right sound and the perfect mood for each of the song situations. The film is set in the film industry so we have 2 tracks that are supposed to be part of a Hindi film soundtrack.
Those 2 tracks are baawre and pyaar ki daastaan. 'Baware' is “Rajasthan on acid”. It a very upbeat folk dance track fused with a break beat. It is also called the circus song as that is what it is picturised on. the visuals are a frenetic celebration of the Hindi movie item song and I wanted the track to be very Indian but have the pace of a trance track. We have used traditional manganyar singers from Rajasthan on the song.
'Pyaar ki daastaan' is a quintessential love song. It has a beautiful melody and the kick of the dhol that reminds us of tunes that are famous in love stories in the industry.
'Yeh zindagi bhi' has a different structure than what we are used to. It is the song that features the opening credits of the film. It has a trip hop influence.
'O rahi re' is sufi- classical in influence but instrumented with guitars.Sapno se bhare naina is a drum and base track with Indian classical vocals (raag bhairavi). And finally the circus 'Baware' remix the baware track remixed by the Medival Pandits. They have done a beak beat version of the track.
The process for great fun we spent 15 days and came up with 6 scrathes. These were the final tunes that went into the album. We never redid a single track. They were just perfect for the situations and the mood. It is a very eclectic album with something in it for everyone.

Commenting on making music for this film, producer, Ritesh Sidhwani said, " The experience of creating music for this film has been fascinating and exhilarating...and with a team like Shankar, Ehsaan, Loy and Javed Saheb the ride gets easier and much more fun.  Luck by Chance is a take on the Indian film industry and therefore the music had to be distinct and contemporary. I am sure you will enjoy this music more if you have already enjoyed ROCK ON!! by the same music directors”.