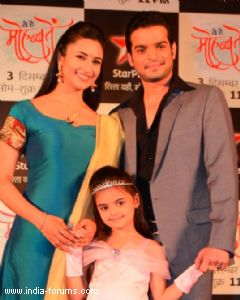 Actors Karan Patel and Divyanka Tripathy are seen as warring neighbors in 'Ye Hai Mohabbatein' and, if rumors are to be believed, the two are not on friendly terms off the screen either.

"The two have not had a showdown over anything, but they prefer to keep to themselves and hardly communicate even during breaks. Even though they don't communicate, they manage to shoot their scenes without any issues," a source said.

'Ye Hai Mohabbatein' airs on Star Plus and sees the two as Raman and Ishita.

+ 2
7 years ago Karan Patel and Divyanka Tripathy...u guys are doing an amazing job in the show...

+ 6
7 years ago Look. Shutup! :P
Divyanka Tripathy and Karan Patel are awesome. TellyBuzz is not credible, unauthentic, false and PRONE-TO-RUMORS, oh and extremely Pathetic too now... However, Ye Hai Mohabbatein... is awesome!

+ 4
7 years ago This is absolutely rubbish!!
Love Karan Patel and Divyanka Tripathi

+ 5
7 years ago Both Divyanka Tripathy and Karan Patel are doing great. And that's what we want.