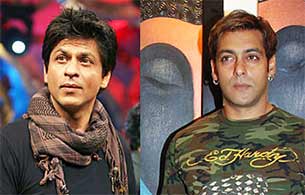 Salman Khan and Shah Rukh Khan are seen as rivals in Bollywood and Salman's father Salim Khan Thursday said that it's not possible for two competitors to appreciate each other's work.

Salim Khan just patched up with his writing partner Javed Akhtar to unveil the trailer of the 3D version of their 1975 cult film "Sholay". They parted ways about 32 years ago after writing together hit scripts like "Zanjeer", "Sholay", "Deewaar" and "Mr. India".

When asked would the hit pair of "Karan Arjun" (Shah Rukh and Salman) ever appear as Jai and Veeru in future, Salim Khan said: "They are individuals and grown up people, and such things happen, but there cannot be love between rivals. It's not possible. Only saints can do that."

"If Shah Rukh's film does well, Salman will not throw a party and vise versa. Dilip Kumar and Dev Anand had maintained, but now these kids are impatient. They feel bad for small things, but there should be courtesy amongst rivals," he added.