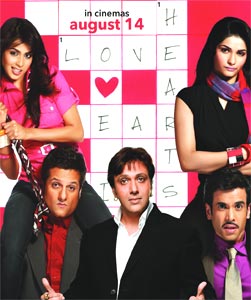 
There is someone made for everyone, including Karan, Bhavesh and Jeet. Karan (Fardeen Khan) and Sanjana (Genelia D'Souza) are madly in love with each other. Marriage is the next step to cement their relationship. But is 'love marriage' the right way to be?


For Bhavesh (Tusshar Kapoor), his life partner, Prachi (Prachi Desai) comes with the approval of his family. But is 'arranged marriage' the way forward? Is it right to prioritize family over marriage? Does Prachi have to prove herself as a worthy daughter-in-law to qualify as an ideal wife?


Jeet (Govinda) is an accomplished divorce lawyer who does not believe in the institution of marriage. He can't be monogamous and is often responsible for his getting his clients divorced.


But is 'no marriage' the right policy? Will Jeet ever find a partner and accept matrimony?


'Life Partner' is about three protagonists struggling on the marital marathon but on different tracks - three good friends with three different approaches to life.


Produced by noted director duo Abbas-Mustan, shot in plush South Africa, and directed by comedy king, Rumi Jafri, 'Life Partner' is a non-stop laugh riot with its heart in its place.