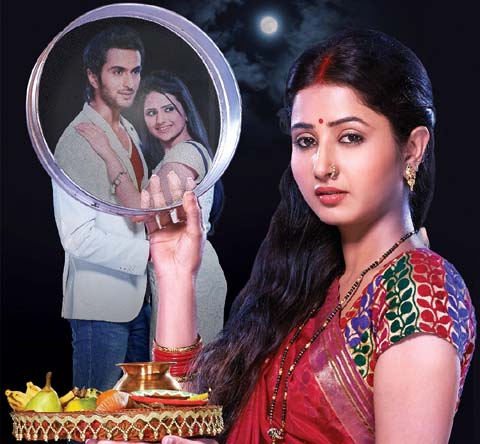 Ravi Ojha's popular show Gustak Dil on Life OK has successfully completed a year today. The show started with a unique concept which revolved around a girl Laajo (Sana Amin Sheikh) who hails from a small village and a cool guy Nikhil (Vibhav Roy) who is madly in love with his childhood friend Ishani (Parvati Sehgal). Thus the the situation occurs and Laajo gets married to Nikhil. Here Laajo's struggle starts to win Nikhil's heart and she is trying to adjust in the modern city. With many gripping twists and turns finally the show completed a year.

We got in touch with female protagonist Sana Amin Sheikh who essay the character of Laajo. She shares her journey with TellyBuzz.

Sounding excited Sana says, "I am really happy that our show completed one year. This is my first show on Television in which has completed one year because all the other shows which I did, had a run of around four to five months.

Like I did my first show Kya Mast Hai Life on Disney Channel, then I did shows like Mann Kee Awaaz Pratigya in which I played a cameo which lasted for around four months and then I did Sasural Simar Ka which I had to quit in between.

But gustakh Dil is the longest running show amongst the show I have done. I am actually happy with the show and my character because usually what happens is that actors get bored after some time due to long shooting hours and so on but in my case I am really happy to do this show and every day I come on the sets and look forward to what different is going to happen in my character.

Initially when I heard about my character I was not sure that it will get such an overwhelming response but I was confident about my work but yes I really got a good response for my character of Laajo from the audiences. I never thought about the TRPs  nor about the response. I just gave my 100% and rest I left it on the audiences. The entire cast and crew of the show is really good.

I want to give message to my fans that thanks for all your love and support, please keep loving us and shower the blessings on us so that our show can run for longer time on Life OK channel and we all are wishing each other on the set as it is a proud moment for us.

As far as the celebration is concerned, we don't know what our producers have planned for us it's a surprise. So yes I am very happy and hope that we have reached a long way."

TellyBuzz wishes a hearty congratulations to the entire team of Gustakh Dil.

Kundus 6 years ago It is high time the show should end on a happy note once Lajjo's dreams has been fulfilled. Any further twists would only complicate matters & bring down the TRP.

sami01 6 years ago Nikhil and Adi are two most intriguing characters at the moment. Even Saggar is amazing. and off course Laajo a very innovative character ,she has short comings but message of positivity she portrays is what matters here---amazing writers who write scenes with such depth and of course the chemistry between various characters is amazing.

harinisriram39 6 years ago Congratulations to the Gustakh Dil team. All the characters are too good.

Kazimierz 6 years ago Congrats Sana Amin Sheikh and Vibhav Roy Gustakh Dis is the BEST SHOW ON TV and love your chemistry keep up the marvellous job, keep rocking and stay blessed love you both muaaah!!!!