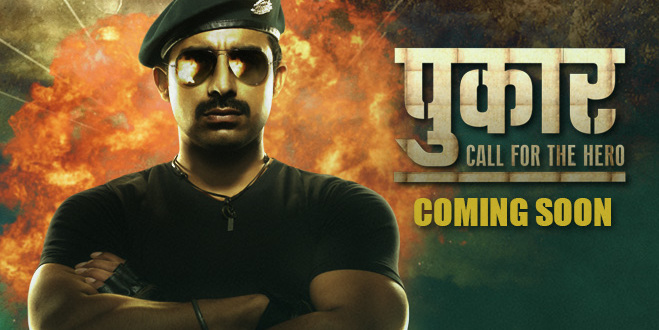 What would you do when you were torn between your duty as a committed soldier for the country you love and the family whom you long to love? The responsibility of serving the nation on one side and finding way back to be in your father's arm on the other. This is a story of a soldier whose responsibility does not only limit to his country and his family but also to the common man, for it is he who rises above all odds to be recognized as people's hero and a savior against a tyrant ruling a city.

Life OK in association with Vipul Amrutlal Shah, gears up for the launch of its biggest action show on Indian Television- Pukaar- 'Call for the Hero'. Slated to go on air on the November 24, 2014, the show will see the youth icon Rannvijay Singh as the lead protagonist in a never seen before avatar debuting in the fiction space. Also making her debut on small screen opposite Rannvijay will be Bollywood's charming face Adah Sharma. With Pukaar- Call for the Hero, legendary actor Raj Babbar will make a comeback on television after long. Actors Prashant Narayanan, Kiran Karmarkar, Shubhangi Atre and Vipin Sharma will also be seen playing pivotal roles.

Deven Bhojani, actor turned director, best known for his comic timings will be co directing the show along with Vipul A Shah. This is the first time Deven will direct an action series. Talking about action, the show gets its might right with Allan Amin being the action director

Touted to be ahead of its league, the premise of the series revolves around Major Rajveer Shergill (Rannvijay Singh), a soldier known for his valor caught between his inhibitions and his tumultuous life. While trying to earn his father's love (Raj Babbar), in a sudden turn of events, his brother goes missing. Amidst all this chaos Rajveer's solitude, finds company in his childhood sweetheart, Aarti (Adah Sharma) who is his only support and stands by him.

When the country needs a solider like him, an adamant Rajveer steps out on a quest to find the culprit responsible for his missing brother. What unveils is a whirlpool of crime, corruption and a tyrant ruling in the garb of a business tycoon (Prashant Narayanan). Rajveer takes the onus of not only bringing back his brother but also swears to sweep away the evils of the society for common man's sake. The fight which was personal becomes his fight for the people.

Embarking on a journey, Rajveer is torn between his duty on the border, the burden to get his father's love back, care for a brother and the responsibility of protecting the common man thus unfolding the story of the ultimate hero.

Commenting on the launch, Ajit Thakur, EVP and General Manager, Life OK said, "At Life OK we have always pushed the boundaries beyond the usual. With Pukaar - Call for the Hero' we introduce action thriller on weekday slot. Pukaar is our tribute to the Indian army and we are extremely proud of our association with Vipul A Shah who masters this genre. The viewers will get to see a different style of action rarely explored on small screen. We also touch upon the dynamics of father- son relationship unlike the usual. With the plot, characters and locations, the viewers can look forward to a different kind of content twice a week promising to be thrilling and entertaining"

Talking about the magnitude of the show, Producer Vipul Amrutlal Shah said, " After my last three films, Force, Commando and Holiday which were based on Men in Uniform', I bring my love for army to the small screen with Pukaar - Call for the Hero'. Army men are the biggest heroes in real life and the hero of my show, Rannvijay Singh comes from an army background and is a perfect fit to the character. With this show I intend to raise the bar of action to a different level altogether for the small screen. The viewers can surely expect a 70mm big screen feel while watching the show as I aim to bring the biggest action show ever on television. We have used the best of the technicians, cameras, gadgets and locations for the show. Pukaar - Call for the Hero' has many firsts - It marks the debut of Rannvijay Singh and Adah Sharma in fiction space. Devan Bhojani enters the action genre as the co director and it is the return of legendary actor Raj Babaar on television. With so much on plate, the show will be a delight for the television viewers.

Shot in various locales of Manali and Mumbai, the story is told in a real world setting and promises world class quality entertainment, where the viewers will be connected to every hour of Major Rajveer's battle against time.

Brimming with action, thrill, suspense, emotions and romance, the show is set to astound the viewers with its fast-paced storyline, never seen before stunts and gripping drama.