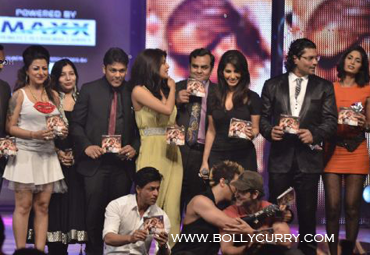 The launch of the video was as expected, a star studded event with none other than the King Khan gracing the launch. For the uninitiated, Ganesh and Shahrukh are well acquainted - apart from choreographing SRK's songs and shows, Ganesh also lent his voice for the title song of KBC Season 3 which was hosted by himself, not to mention that SRK also attended Ganesh's debut release event.
Ganesh, who has been noted as the only Indian pop act to produce, write, direct and choreograph his own music with his debut album "G", believes that the once hyped-over pop culture of India is now on the verge of extinction and the star hopes to revive it back to it's former glory.
Here's waiting for "Let's Party" with bated breath and wishing Ganesh all the best!
More pics from the event can be found: http://india-forums.com/event/3476-shah-rukh-khan-hrithik-roshan-and-priyanka-chopra-at-ganesh-hegde.htm
Author: Tanya.
Editor: Jenifer.
Graphics: Tori.
1 Likes

Rhea Chakraborty did not name any Bollywood actors during ...
29 minutes ago