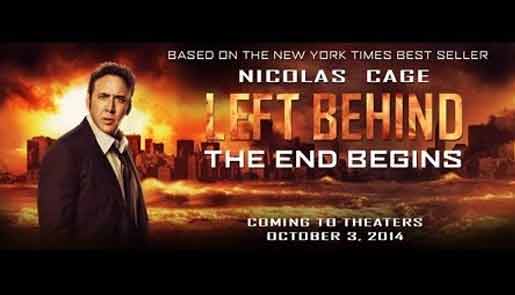 Many Christian faiths believe and talk about an end-time event in future, when all true believers who are still alive before the end of the world, will be taken from the earth by god into heaven. The term describing this event is "The Rapture."

Packed with chaos, "Left Behind" is a disaster film based on this Christian, 'Rapture' theory.

The story focuses on a philandering airline pilot, Rayford Steele (Nicolas Cage) and his family. His wife Irene (Lea Thompson) is a 'born again Christian' and every other member in the family considers her to be crazy as she constantly speaks about god.

On that fateful day, Chloe (Cassi Thomson), their college going daughter visits home for a family union, to spend time on her father's birthday, only to be told that he has to fly to London on duty. So to surprise her father, she lands up at the airport.

Here, she meets Buck Williams (Chad Michael Murray), a sought after investigative journalist, who is supposed to take the same flight as her father. They click as friends. While she is chatting with Buck, she sees her father sharing some light moments with a blonde airhostess, Hattie Durham (Nicky Whelan) and suspects that he is having a fling with her.

What further cements her doubt is when her father's colleague hands over the prime tickets of U2 show in London, which her father had arranged for. This conveys to her that his trip was a planned one.

After her father and Buck leave for their flight, she goes home disappointed. To cheer herself up, she spends time with her kid brother at a mall. It is during this time that 'The Rapture' occurs.

Chloe freaks out when her brother disappears during an embrace and her devout mother (Lea Thompson) is nowhere to be found. There is pandemonium all around as millions go missing.

In the meanwhile on the aircraft, there is panic in the aisles of the aircraft as some of the passengers too disappear. Buck comes to Rayford's aid when his co-pilot disappears.

By the end, they realise that the disappearance has the hand of god.

Technically, the script is taut and well-strategised with visuals shuttling between in-flight and ground shots. The expositions are talk heavy with dialogues like, "If you look hard enough, you'll see exactly what you are looking for" or "Pray to god, whose God, yours or mine?"

Visually, the frames that capture the anxiety amongst the cast or the panic and pandemonium that the disaster throws forth, with zero finesse, seems staged and tacky.

On the performance front, the characters are flat, monotonous and stereotypical, offering nothing extraordinary and the humour too is painfully unfunny.

Overall, with an average production value that combines religious and disaster movie tropes, this film may appeal only to a select audience.