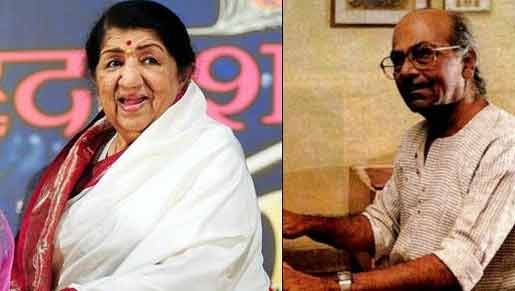 Together they changed the destiny of popular Bengali songs. And now 19 years after the demise of Salil Chowdhury, legendary singer Lata Mangeshkar recorded a newly-discovered tune by late composing maestro under the musical supervision of composer Mayuresh Pai.

Lata will turn 85 on Sunday.

"Salilda was Salilda. No one could compose songs like him. His tunes were layered and textured and very difficult to sing. I loved the challenge of singing Salilada's Raaton ke saaye in 'Annadata' and Rajanigandha phool tumhare in 'Rajnigandha'," said Lata, who is called the Nightingale of India.

Folklore has it that once during a particularly difficult recording of a song composed by Salil Chowdhury , she had passed out.

"It's a fact. I did faint while singing one of his songs. Salilda's tunes were a special challenge for me. And the fact that many of his Bangla compositions were later sung in Hindi made it doubly difficult for me," she said.

And now an undiscovered composition of Salilda has reached Lataji's lips.

"It's a great honour to be singing one of Salilda's compositions when he is no more with us. I hope I do justice with the song," said Lata, who went on to record songs for more than 1,000 films in 36 languages.