Mumbai, Sep 19 (IANS) Rituparno Ghosh has never been happier. His entire 'Last Lear' team had a picnic in Toronto. 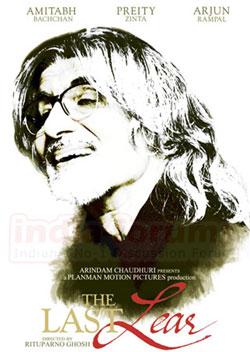 Featured Video
'All of us from the 'Last Lear' team were completely cut off from the festival crowd because we were put up at the Royal York because Amit-da (Amitabh Bachchan) wanted to stay there. But there was stunning solidarity among us,' Ghosh said.

'And then Prosenjeet, who was there for Buddhadeb Dasgupta's 'Kaal Purush' joined us because he has a cameo in 'Last Lear'. Arjun had come with his wife Meher and Prosenjeet's wife was also there, also the producer's wife so the ambience was relaxed,' he added.

Ghosh recalls the journey to the 'Gala' event at the Toronto Film Festival.

'All of us got into three stretch limos as though we were proceeding to a picnic. I was wearing black, Amitda was wearing an off-white closed neck for the gala, Arjun was wearing a suit, Preity was wearing grey, and so it was a perfect 'Grey Card' situation for television,' Ghosh said.

'There was only one reason why I was very hassled. I was seeing 'The Last Lear' for the first time. I've been to innumerable festivals but this was a unique experience. They kept asking why Shakespeare was part of an Indian film. I had to keep explaining, I grew up meeting Shakespeare on the streets of Kolkata.

'Theatre Road was renamed Shakespeare Sarani. Shakespeare is lodged permanently in Kolkata. Anyway, Deepa Mehta and Vishal Bhardwaj and his wife were among those who really loved 'Last Lear',' he said.