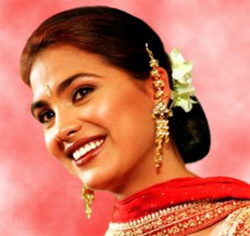 Mumbai, March 24 (IANS) Bollywood actress Lara Dutta, who was all set to accompany Bachchans on their much talked-about world tour 'Unforgettable Show', has cancelled her plans because of knee injury.

'I have injured my knee and have been asked by the doctors not to strain it further. Since I am also doing a big action film this year, going on the tour for three months will only aggravate my injury. So, unfortunately and regretfully I have had to withdraw from the 'Unforgettable Tour',' she said in a press release.

Bollywood icon Amitabh Bachchan will start touring the world next month along with son Abhishek and daughter-in-law Aishwarya. Bipasha Basu and Riteish Deshmukh are also expected to accompany them.