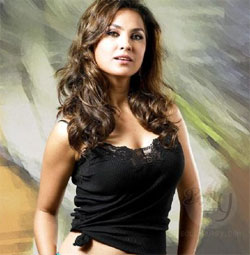 Lara Dutta, who has been creating waves with her svelte figure and bold avatar in the promos of 'Blue', hopes the film turns out to be a hit and makes her Diwali really special.

'Blue', also starring Akshay Kumar, Sanjay Dutt and Zayed Khan is centered on an underwater treasure guarded by sharks and is slated to release Oct 16, just a day before Diwali.

'My next film after 'Do Knot Disturb', 'Blue' is releasing just a day before Diwali, so I'm hoping that it does well and my Diwali becomes a bumper Diwali,' Lara, who was wearing a pink satin dress, told reporters here.

The former beauty queen-turned-actress was in the capital to attend the 25th edition of MMTC's Festival of Gold.

Asked how she planned to celebrate the festival of lights, Lara said Diwali would be a family affair for her this year, unlike last time.

'Diwali is a festival meant to be celebrated with family, but last year I was shooting in Singapore for 'Do Knot Disturb'. So this year I'll be spending time with my close ones,' Lara said.