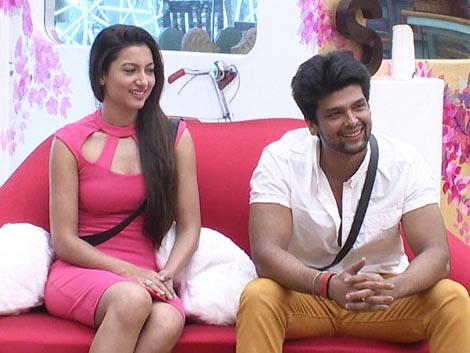 Who knew that when they met as contestants on the reality show Bigg Boss Saath 7 they will come so far? Kushal Tandon and Gauhar Khan who developed affinity for each other right from the beginning of the show have openly displayed their affection for each other through the show.
Even other contestants had complained about how their closeness affects the general environment of the house. We saw how the two would play games, confide in each other and keep on whispering sweet nothings and were generally in their own world even though they were surrounded by others.
Gauhar even took the ultimate step to leave the house with Kushal when he had to suddenly exit from the show as he got violent with VJ Andy. She came back the next day and even Kushal came back to the show couple of days back. Kushal was given a warm welcome by all and the one who was most excited to see him was Kushal. However, there was a twist in the tale in the form of Ajaz Khan who was a wild card entry and had entered the show when Kushal was out of the house.
Ajaz has openly admitted his feelings for Gauhar and flirts with her which was okay till Kushal was not around, but once he came back even Gauhar rejected his overtures and in the last weekend episode host Salman Khan too brought this topic to notice. After this Gauhar and Kushal tried to explain to him as to how Ajaz is just a friend whereas there is liking between Gauhar and Kushal. Kushal seemed to be upset with this whole issue.
Now as per our sources it seems that the couple has ultimately said the three important words to each other, "Yes, Gauhar and Kushal have finally admitted to being in love. All these days they have said that they were just friends but now things stand different. Gauhar even told Ajaz that she thinks of him just as a friend and that he should try and avoid creating troubles between her and Kushal. She openly told him that she and Kushal are very much in love with each other and Ajaz shouldn't try getting close to her."
After this there was lots of difference in the behavior between the trio adds the source, "While Kushal and Gauhar looked comfortable in each other's company and even their body language was giving different signals, Ajaz was seen looking very sad and broken hearted. Ajaz who is always singing songs was seen singing soulful numbers and was being counseled by fellow contestants."
Will this love story stay till the last and what will happen once they come out? Only time will tell...
Reporter - Krishma Solanki
Author - Seema Khot Mattoo
38 Likes

purpleymatter 6 years ago Love Kushal. Hes the most genuine person in the house! Keep rocking dude.

EVIL.PRINCESS 6 years ago Ohh..i liked Kushal as Virat but now i just hate him..

RapChick101 6 years ago Gauhar and Kushal. :* &lt;3
I like them together and wish them togetherness.:D
Though I did feel bad for Aejaz. :(

Anu101 6 years ago Disappointed in you Kushal Tandon!!!! I stilll can't believe I spent sleepless nights thinking about VirMan and you and Nia!!!! I just can't digest the fact that this is true love.
Wondering why why why and why I didn't fall in love with Karan Tacker :( There would be no disappointment then.
Its not just the Gauhar issue. Overall your behaviour as a human being is at times (mostly) questionable :(

sxy_angel1 6 years ago kushal had breakup wid elena after nach baliye...and is still fren wid her which he told in an episode also...anyway i lyk kushal and gauhar